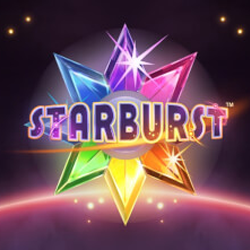 Starburst Touch is the mobile platform equivalent of the online slot of the same name. Starburst Touch has become nothing short of phenomenon, with many top mobile casinos offering this title.

Starburst Touch is often used to offer free spins to players, too. The touchscreen slot itself is just as simplistic as its online cousin, with players able to bet on 5 reels and 10 paylines of gem themed gaming.

Coin denominations stem from a low of 1p up to £1, and you can stake up to 10 of these per line. All of the paylines can also be altered in this slot. Starburst Touch won’t cost you any more than £100 a spin, although you can get away with playing it for just 1p per line, per spin, if you wish to play on a budget.

There is only one special icon in Starburst Touch, and that symbol is the multi-coloured “star” icon. It is really easy to spot. Unlike other Net Entertainment developed slots, though, this wild has no monetary value on its own. It is only capable of appearing on the second, third and fourth reels.

The Starburst Wild Bonus is triggered by landing a wild icon on the aforementioned reels. When one appears, it will expand to cover the entire reel. A free re-spin is then triggered, allowing players to win further piles of cash. However, if another wild appears during this re-spin, the player will land another re-spin. Up to 3 re-spins can be claimed by the player, with wilds appearing on the second, third and fourth reels at once when this happens.

Starburst Touch is certainly short of special features, but it was never designed to run like normal online slot machine games. This slot is about simple mobile casino gaming. You have big bold buttons to touch and alter your wager with, and limited special features to enable you to play it rapidly, whilst on the move. It is even dirt cheap to play if you want it to be.