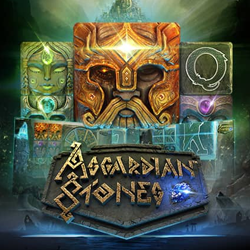 Any new slot release from NetEnt always has us feeling a bit giddy, but the latest Asgardian Stones looks set to a blockbuster from the get-go. We simply can’t wait to check out the 5 reels of this Norse mythology-themed online slot!

In Norse religion, Asgard is the home to a tribe of Norse Gods. This is where Asgardian Stones is set, and this powerful and atmospheric game is enhanced with striking visuals and a strong soundtrack. There are 20 pay lines and sharp graphics, plus the super popular Avalanche feature amongst other bonus features, including free spins.

The Asgardian stone faces are the higher value symbols on the reels, followed by A, K and Q. The wild stone symbol substitutes all other symbols apart from the Bonus Wheel. All symbols on the reels can appear as 2×2 or 3×3 Colossal symbols in main game and free spins (except for the wild in the main game).

NetEnt have adopted the Avalanche feature for Asgardian Stones; you have probably come across this before and it features the symbols falling into position rather than spinning. A winning combination triggers an avalanche as the winning symbols explode and disappear, leaving room for new symbols to fall in their place and potentially creating further wins. The avalanche will continue to fall until wins stop occurring.

After an avalanche, it is possible for a Colossal Crush feature to occur. If there are empty spaces below the colossal symbol, it falls, crushing all symbols underneath. This continues until the symbol sit at the bottom of the reels or there are no empty positions left underneath. As it falls, it awards a multiplier. 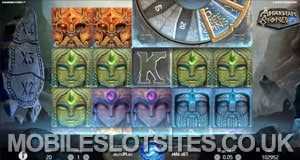 In addition to the special features in Asgardian Stones, there are a couple of great bonus features. The Bonus Wheel feature occurs when a Bonus Wheel lands; this is a 3×3 symbol block that lands on reels 3, 4 and 5 only. Once any avalanche wins are over, the Bonus Wheel stops and you can win coins, free spins or both!

Three fields within the Bonus Wheel award free spins. That’s 5 each, so a maximum of 15 free spins can be won. During free spins, the wild symbol can appear as a colossal symbol, and the Bonus Wheel can be retriggered a total of 3 times.

The abundance of features in Asgardian Stones can inevitably lead to some huge wins. The combination of thrilling features, striking theme and awesome graphics makes for another true NetEnt hit. Not to be missed!