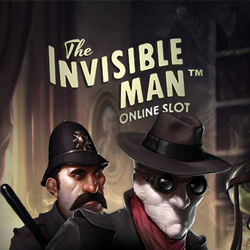 The Invisible Man is another one of NetEnt’s franchised games. This slot is based on the movie of the same name, and features authentic and faithful imagery, true to the movie it is themed on.

The Invisible Man uses really modern 3D graphics (although somewhat cartoony) to tell its tale, and it also has some rather catchy bonus features. The Invisible Man can see players wager on 5 reels and just 20 lines, and they won’t have too much control over how their bets are constructed.

Coin denominations range from 1p up to 50p, with up to 10 of those available to bet per line. You are going to find yourself wagering somewhere between 20p and £100 a spin in this slot, which is officially licensed by Universal Studios.

Two wild icons make an appearance in The Invisible Man slot. The first of these is the policeman, which only appears on the first reel. It will move one place to right and trigger a re-spins when it appears. Griffin is the second icon, and it can only appears on the fifth reel. It will move one place to left whilst offering a re-spin. During the free spins bonus, though, wild symbols can appear on any reels.

It is also worth mentioning that players can win from left to right, or right to left in this franchised slot. 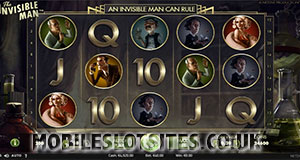 If the police wild appears on the first reel at the same time as the Griffin wild appears on the fifth reel, then the player will trigger a free spins bonus. Initially, 10 free games are offered. Above the reels are a police and griffin metre. Whenever their respective icons move off the reels, a space on the metre is filled. Simply fill a metre to trigger a bonus. The police spins bonus offer 3 free spins with 5 randomly triggered wilds. The Griffin Rage bonus allows players to pick from several locations to win cash prizes or multipliers.

The Invisible Man is loaded with special features, and because it is dirt cheap to play, this slot is great value for money. Everybody is well advised to try out this superb, well-designed movie themed slot.