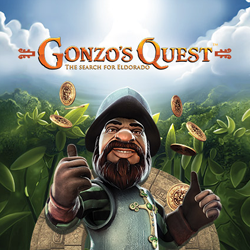 Gonzo’s Quest Touch is Net Entertainment’s mobile version of their popular online slot of the same name – the Touch part being the name of their mobile gaming platform, not part of the title.

Gonzo’s Quest Touch is identical to the online Gonzo’s Quest slot in every way, save for the fact the player uses touchscreen to play the game. The story still features Gonzalo Pizarro, and his South American adventure, it still features avalanche reels, and it still costs between 20p and £50 a spin. Players can also still win the same 2,500-coin, non-progressive jackpot as in the online slot.

The question mark icon is the wild symbol in Gonzo’s Quest Touch. When this symbol appears, it can replace all other symbols in the slot. It is one of only two special features in this slot machine game.

The main special feature in the game doesn’t come via a symbol, though, but is present throughout the game, all of the time. Avalanche reels award players increasing multipliers for every consecutive win they bag. After a win, the symbols explode, and new ones drop down to take their place. You can win multipliers which range from 1x up to 5x with this feature. 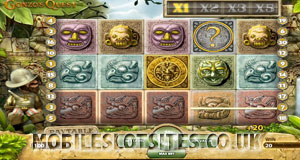 A golden emblem acts as a Free Falls icon in Gonzo’s Quest Touch. When three or more appear anywhere on the screen, the Free Falls feature is triggered. This is basically a free spins bonus, consisting of 10 Free Falls. During the Free Falls bonus round, all Avalanche multipliers will be increased, from 3x right up to 15x. These are the same as in the online version.