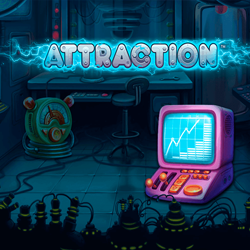 Attraction is the title of a NetEnt online slots game based on science, more specifically magnetics and laws of attraction – hence the game name. As fascinating as science is, it’s just not for some of us but don’t let the subject put you off; this is an engaging game nevertheless and includes a great feature integrated into the main game.

Attraction is a 5 reel, 3 row and 10 pay line slot set within a deeply-lit laboratory brimming with computers and various wires and machinery.

The reels are brighter and display some attractive symbol designs with electric flashes through winning pay lines as a nice touch. The game is designed well and the retro sci-fi music adds to the atmosphere.

In typical NetEnt style, there is no bonus feature but they have ensured that plenty goes on within the main game to keep us all glued.

The navy reels of Attraction present a variety of laboratory recording, monitoring and measuring devices which make up the higher win symbols. Next to these are standard playing card symbols from Ace through to 10. There is also a Wild symbol, the stand out pink atom, which appears on the second, third and fourth reels only and partly makes up the main feature of the game. 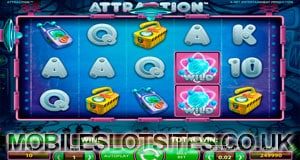 The frame of the Attraction reels supports a magnetic device that moves around as you spin. The magnet selects a position randomly and highlights either a row or a reel accordingly. Keep your eye on the selected reel/row, for this is where you will hope for an atom wild to land. Whenever a wild lands on the same row or reel as the magnet, a re-spin is awarded featuring 1 or more Sticky Wilds. For every re-spin, two magnets are added to the reels and the proves continues, therefore increasing the possibility of continuing the re-spin feature with Sticky Wilds. This can ultimately lead to some quite lucrative spins if you’re lucky.

It’s something we’ve said before about other NetEnt slots, but the lack of a separate bonus feature is really no big deal, because the main game feature is substantial and entertaining enough. This is another good game from NetEnt – not our favourite theme, admittedly- but a good theme nonetheless. It’s well worth spending some time on Attraction and see how the magnet feature works out for you.