Egypt is one of the most popular countries of casino software developers and players. That’s the impression you might get at every single online casino, anyway.

There are so many Egyptian slots out there, it’s hard to keep track of them all. It isn’t surprising, considering the popular image of Ancient Egypt as an excessively rich place. The pharaohs and their golden masks on slot games attract gamblers like flies.

The vast number of Egypt-themed games often result in very similar and unoriginal experience. However, various game studios surprise with a new twist to this theme once in a while.

The key here is gameplay itself because the theme has been exhausted long ago. It’s totally usual to find Egypt slots with symbols and features including:

The unique part of most of these games is usually a combination of some gameplay elements. It can be a bonus round that takes the player inside a pyramid. Or maybe there are several features that include different gods and goddesses with their own bonus?

Whatever the case, it’s clear that you’ll love Egyptian themed slots if you like their history and style.

About Temple of Isis by Eyecon 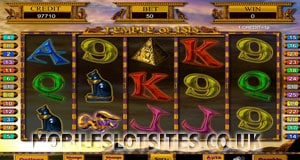 Even so, the slot does contain some rather nifty graphics, as well as 5 reels and 25 paylines of gaming action. Players can expect to be able to compete to win a total non-progressive jackpot worth 30,000 coins. Wagers are also really cheap in this game. Just how cheap? How does a wagering range of 1p up to £10 a spin suit you? You won’t have to wager any more than that in this slot.

Temple of Isis is not littered with special features, but those it does have are quite alright. Players can use the Isis wild icon to substitute for all other symbols in the game, with the exception of the scatter icons. All wins with wilds will be doubled in this slot.

Players can also expect to be able to use a gamble feature if they wish. This is available after any winning spin, although you only have a 50% chance of success, so it isn’t terribly ideal. The free spins bonus is far more beneficial.

That free spins bonus is activated by landing 3 or more of the scatter symbols anywhere on the reels. You will also pocket scattered wins for your efforts, as well as a total of 15 free spins. During this bonus round, all winnings will be tripled, which can make the difference between a so-so win, and an extravagant one.

Temple of Isis slot certainly has a couple of really nifty features, but it doesn’t go overboard with them. If it had any other theme, this slot would be a decent one to play. However, there are a surplus of Ancient Egyptian themed slots out there on the net for you to choose from, so you may not settle for this one, which is just a few steps behind its rivals. 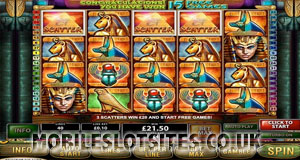 The Cat Queen video slot is a colourful, and graphical Ancient Egyptian themed video slot, and one which has been designed and developed by Playtech. The game features all of your customary Ancient Egyptian symbols and imagery, which may make it a tad predictable. Still, when have these themed slots not been popular?

Cat Queen features a total of 40 paylines over its 5 reels, and players can choose line bets of a penny up to £20 a pop. Paylines are adjustable, too, so players are going to be looking at wagering anything from a minimum bet of 1p per line, per spin, up to a maximum stake of £800 a spin. The most you can expect to win on Cat Queen is 1,000 coins.

Players should keep their eyes peeled for the Cat Queen herself. She is the wild icon in this game. This symbol is also the best paying one to star in the slot. If you can line up 5 of the Cat Queen icons in any positions on the reels, you will walk away with the non-progressive jackpot. Wilds can replace all other icons in the game, save for scatter symbols.

Those scatter icons take the shape of pyramids. When they appear on the reels a total of 3, 4, or 5 times in all, you will pocket scattered wins of 5x, 10x, or 50x your total bet.

Playtech has included a gamble feature in this slot, and it can be activated after any winning spin. Your odds of success aren’t great with this feature, since the bonus consists of a simple “pick the higher card” bonus round.

It is important that players land 3, or more, of the scatter icons. It doesn’t matter if you land 4, or 5 of them, because you’ll get the same prize as with just three. This prize is a free spins bonus round. A total of 15 free games are offered to the player, though no multipliers are present in this bonus game.

Cat Queen is a nice enough video slot. It has decent features, and it has a broad enough wagering range to make itself appealing to small, medium, or high-rolling players alike. 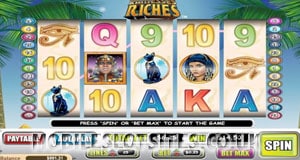 Ramesses Riches is one of NextGen Gaming’s most popular, and well-known video slot games. It is still hugely popular today, and long time after it was first launched. Ancient Egyptian themed slots always seem to do well in the online casino world, and this is one of the finest, based on the great Pharaoh of Egypt, Ramesses II.

Played over 5 reels and 20 paylines, this video slot gives total control over betting to the player. You have the freedom to choose coin denominations of a penny up to £2, but can only bet one coin per line. At its cheapest, you will find that this Ancient Egyptian themed slot costs you just 1p per line, per spin. If you want to push the boat out, it will cost you just £40 for a maximum wager stake. Up to 5,000 coins can be won in this game.

Ramesses himself acts as the wild symbol in the game. It can substitute itself for all other icons in the game, excluding the scatter in true slot fashion. It will also double your prize, and present you with the non-progressive jackpot if you line 5 on any active line.

The ever famous Ankh is the aforementioned scatter. Should it appear a total of 2, 3, 4 or 5 times anywhere on the screen during a spin, you’ll win 2x, 5x, 15x or 100x your total stake, respectively.

The scatter is also used to trigger the free games feature. Three or more on the screen will do it. You’ll get to win up to 20 free games, and any wins you pocket during this feature will be tripled. Every single Ankh you locate will give you another 4 free games in this bonus, and all wild wins will be met with 6x multipliers.

Ramesses Riches is a classic in the mobile casino world, and it is not difficult to see why. Sure, the base game is not really different than other slots. The free spins feature is very rewarded, though, and will likely be enough to tempt players to play the slot on its own. 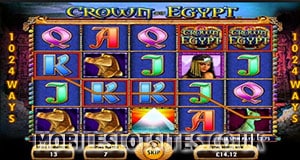 The first thing that stands out in the Crown of Egypt video slot are its graphics. They are considerably better than those which feature in many other IGT slots. Then something else hits you. Look at how many paylines this slot has to offer. There are 1,024 of them spread over 5 reels.

That’s a lot of different ways to win. You can actually alter the lines in this slot, which does alter your bet. Playing with just 1 line in this Ancient Egyptian themed slot is still going to cost you £1 per spin, which is pretty steep. It is far better to play with the 1,024 ways to win structure, even if maximum bet wagers can cost you up to £2,400 a spin.

If you’re going to be spending that kind of cash, you’ll be hoping for a good return on your special features. You get it. Every single icon in this slot acts as a separate reel for starters. The Crown of Egypt icon also acts as a wild. It can replace all symbols in the game, except other special icons, but only appears on the second, third, fourth and fifth columns.

Cleopatra herself is the best paying icon in this game, although we rank the pyramid as a more important symbol. Here’s why…

If a player lands 2, 3 or 4 of the pyramid icons on the third column, they will trigger 1, 15 or 20 free games, respectively. Although no multipliers are afforded to wins in the free spins bonus game, players can still win more free games. Simply land another 2, 3 or 4 bonus icons whilst playing the free spins game, to add more free games to your tally.

Crown of Egypt is designed as a high-rollers game. This explains why the winnings tend to be few and far between, but vast, and why the stakes cost so much. This high variance slow isn’t ideal for players on a budget, so it has never proven itself as popular as other Ancient Egyptian themed slots, despite the fact that it looks great. 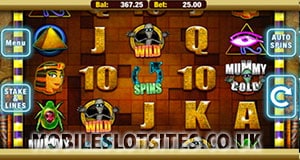 Nektan Slots is a Gibraltar-based gaming company that has recently entered the market. They produce slots that are designed strictly for play on mobile devices. All of their games feature outstanding graphics and sound. One thing Nektan has not produced, however, are original themes. That is again the case with Mummy Gold.

This slot is one of several on the market that uses Pharaohs, Mummies and other features of Ancient Egypt. There are no original symbols in this game other than the top paying symbol, the Mummy Gold Logo. Otherwise, you will see the Eye of Horus, a Scarab Beetle and the Queen of the Nile, Cleopatra.

The Wild symbol in the game is, appropriately, a Mummy. This mummy is very thin and has adapted a menacing stance. The Wild Mummy substitutes for all other symbols except the Scatter.

Mummy Gold is an entertaining game with Nektan graphics that almost make you feel like you’re inside a movie theatre. The game board has an impressive dark background that resembles an old Egyptian tomb. You’ll also hear exotic and dramatic music playing when the reels are spinning. And you’ll get all this entertainment while you have a chance to win thousands.