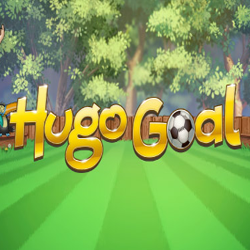 Join Swedish cartoon character Hugo for a kick about in the latest online slot game from Play ‘N Go. Released just in time for World Cup 2018, Hugo Goal will help to kick off the excitement as the greatest sporting event of the year gets underway. Of course, it’s a football-themed online and mobile slot, featuring Hugo, Don Croco, Goat and Akskylia. There’s a 3×3 reel grid with 5 fixed paylines, payable from left to right. Get ready to spin the reels and perhaps trigger a free kick or a penalty shoutout where you can win up to 800x your stake!

The reels are filled with the main cartoon characters: Hugo, Akskylia, Don Croco and Goat. Hugo is the highest value symbol and also the wild; substituting all other symbols in the game. You’ll also find crucial football icons: the ball, a whistle, football boots, a stopwatch and flags; these are the lower win symbols.

The cartoon characters appear as stacked as they land on the reels. Trigger an Action Replay by landing a combination of two full stacks of a particular character symbol on a non-winning spin. This will trigger a re-spin on the available reel, which spins until you win!

Should you land a combination of two full stacks of symbols instead (the football, the flags or whistle, for instance), you will trigger a Free Kick. This involves one re-spin on the avialble reel; giving you another opportunity to create a winning combination. 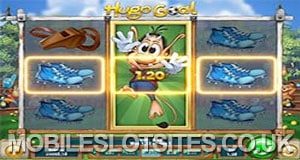 The main aim of Hugo Goal is to trigger the Penalty Shootout bonus feature. To do this, fill the reels with the same symbol; this is easier than it sounds since the reel grid is only 3×3 and many symbols are stacked. You’ll get 5 penalty kicks with Hugo as a goalkeeper; your job of course, is to save them. Grab an increased multiplier for every save you make; and score a x10 multiplier if you save all 5 penalty kicks!

A fairly simple online and mobile slot, but one we’re sure you’ll get a kick out of. It’s worth a few spins to trigger the Penalty Shootout, boost your wins and is an entertaining game worthy of checking out in between the World Cup 2018 matches.