Jungle and safari themed slots are the perfect escape for anyone in need of relaxing after a cold grey day of work.

Game designers manage to create some of the most immersive and satisfying games you’ll play. They do this by emulating the dense fauna and flora of a jungle or safari thanks to seamless graphics, music and sound effects.

It’s clear that software providers have a ball when designing safari and jungle themed slots. Indeed, there are always little details jumping out from the background, the symbols or around the reels.

Open one of these slot games and you’ll soon be ducking under dense, rain-sodden jungle vegetation, while on the hunt for the elusive Blue Morpho butterfly.

Alternatively, you could be skulking through tall desert grass, observing a lion pack and keeping an eye out for the arrival of the king of the jungle.

Also, lots of these slot games are derived from popular classic literature. You’ll find many jungle-themed games, for instance, that are inspired by Rudyard Kipling’s ‘The Jungle Book.’

Not sure where to start? Don’t worry, we’ve got tons of recommendations to make. It really depends on what you want out of your safari and jungle themed slot experience. 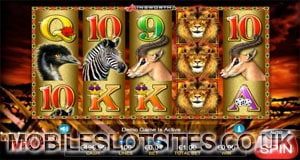 Roaming Reels is the title of an African-themed online slots game from Ainsworth. The word ‘roaming’ refers to roaming safari animals, rather than an innovative twist on spinning reels in regular slots game (disappointingly – let’s hope the game makes up for this!).

Roaming Reels features 5 reels, 3 rows, up to 100 pay lines and is set within a strikingly beautiful scene of an African jungle sunset. The soundtrack doesn’t really kick in until the bonus feature; until then you’ll be listening to simple spins and clicks. The graphics, however, are really impressive – particularly the animal imagery. Read on to discover more about the bonus features of Roaming Reels.

The 5 golden reels of this visually luxurious game offer an attractive display of animals. There’s a zebra, an ostrich, a gazelle, a paw print, a silhouette of Africa as well as standard card symbols. The lion symbol is the wild. This appears on the third, fourth and fifth reel and makes an impressive roaring sound whenever it helps to create a winning combination. The lion substitutes all symbols except for the scatter.

The Roaming Reels scatter symbol is represented by the mesmerising tree in front of a sunset icon. This is your key to the bonus game, which is the highlight of Roaming Reels (well, other than the visuals). To trigger the bonus feature, you must land either 3, 4 or 5 tree scatter symbols anywhere on the reels, and you will receive 8, 12 or 20 free spins respectively.

During the Roaming Reels free spins feature, the lion wild appears on the first, third and fifth reels only. Scatters can also appear, and if you land at least 3 again, it is possible to retrigger your free spins, therefore this can turn out to be a fairly lucrative bonus game.

To our surprise, Roaming Reels made up for our initial disappointment based on the title. It managed this by dazzling us with some impressive, detailed graphics, a fantastic theme and a decent enough bonus game. There’s nothing overly complicated about Roaming Reels; it’s a simple but good-quality game, and certainly worth checking out. 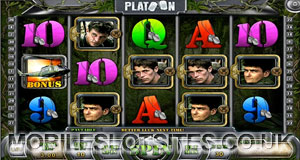 This iSoftbet online slots game is based upon the 1986 Academy Award-winning movie named Platoon. If you haven’t seen it, Platoon is a harrowing and atmospheric Vietnam War film starring Charlie Sheen and Willem Dafoe.

The slot game does well to create an intense and disturbing atmosphere; it’s set within the quiet Vietnamese jungle with typical sound effects that you’d associate with war: rustling within bushes, rifles being prepared, tanks coming and going, etc. The graphics and special effects are equally impressive, with the main characters of the film featured. There are superb helicopter animations and movie clips too. The slot game features 30 pay lines across a standard 5 reel, 3 row layout, plus a brilliant free spins game for players to enjoy.

Platoon displays two sets of reel symbols, both theme-related in their own way. The higher value icons are the movie characters including Charlie Sheen as Chris Taylor. The lower value symbols are playing card icons from Ace to 9, decorated with Vietnamese-style dog tags.

During the main game and free spins, whenever a wild tank lands in view, a respin is provided. The tank moves one position to the left until it disappears off the reels, but a respin is granted each time until then. This means you could potentially end up with 4 respins, if your wild is over on the far right side of the reels when it initially lands.

The helicopter bonus symbol leads to the free spins bonus if 3 or more land.

During free spins, winning combinations pay both ways and it is possible to retrigger more free spins. Even more delightful are the wild tank respins. Your bonus game could feel like it is going on forever (not a bad thing when you’re watching that bank balance climb) as the presence of wilds results in lots of respins. If you’re lucky, this could lead to a very lucrative bonus game indeed.

Don’t be fooled into thinking that you’d need to a be a Platoon fan, or even a war film fan, to enjoy this online slot game. Platoon is a brilliantly atmospheric game with impressive animations and fantastic bonus features. iSoftbet have created an excellent game and you’d be a fool to miss it! 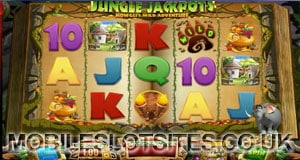 Always fancied being King of the Spinners….errr, Swingers? Well now you can be both in this NYX slots game based on Rudyard Kipling’s The Jungle Book. Kicking off with super sharp and smooth graphics, Jungle Jackpots: Mowgli’s Wild Adventure is introduced in the form of pages turning within a classic book. The game is set within the jungle with the endearing Mowgli as the star character, but of course he is surrounded by his lovable animal pals Baloo, Bagheera and the rest.

There are 20 fixed pay lines, 5 reels and 3 rows, plus an enormous amount of bonus features – both random and triggerable – to keep you on your toes and entertained in this truly wild adventure of a slots game.

The Jungle Jackpots reels feature theme-related symbols aplenty. The highest value symbol is Baloo’s pawprint. This is the wild and substitutes all other symbols but the Baloo Bonus (more on that one later). The Jungle Jackpots logo symbol is also a higher paying icon and appears as super stacked on the reels.

There’s also a fruit bowl, some village huts, flaming torches and lastly, standard playing card icons from Ace to 10. When the symbols create a win across an active pay line, these are lined up with a lovely bamboo feature (we love some good theme-related detail, so if you do too, keep your eyes peeled).

Jungle Jackpots has so many additional features that we bear-ly (geddit?) know where to begin.

First of all, Mowgli’s Wild Adventure is a random feature and can trigger a page turn during any spin, to reveal either:

In addition to these random bonus features, it is possible to trigger a few more games.

As if all of the above isn’t wild enough, you can also play the Baloo’s Bonus Gamble Feature; a game where you can choose to keep your feature or gamble it for the chance to win another of the bonus features.

If you like to be thoroughly entertained by a great-looking slots game with unpredictable features, then this is the game for you. A great theme and more bonus features than we can keep count; this is an excellent game with an exceptional level of detail that isn’t to be missed. 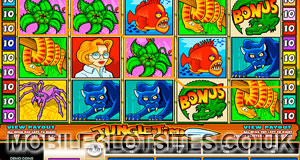 A handsome chap called Jim is about to take us on a thrilling expedition through the jungle – which jungle, we are not sure of – but what we do know is that there are ferocious creatures lurking everywhere. This online slot game is called Jungle Jim, it’s by Microgaming and of course, set in the jungle.

Though there’s not much of a visible backdrop, the atmosphere is set by the chirping, tweeting, grunting animal noises that truly manage to set the scene. Jungle Jim is set upon a 5 reel, 3 row grid and features vivid, cartoon-style symbols and 15 pay lines. There’s a generous bonus feature on offer including free spins and increased multipliers. Are you ready for an adventure?

The colourful Jungle Jim grid presents a variety of jungle-themed symbols. Our main man is Jim himself with his dazzlingly white gnashers; of course he is the highest value symbol.  He is joined by an elderly professor, a young female assistant, a ferocious puma, a coiled snake, a tarantula, a piranha and some kind of plant – we presume a poisonous one!

In addition to the regular symbols are the special symbols; a scatter symbol and an alligator bonus symbol. Any scatter wins are multiplied by the total bet staked and are added to pay line wins. The alligator bonus leads us to the main feature of Jungle Jim.

Jungle Jim is a simple but particularly enjoyable game to play. The vibrancy of the game plus the effective jungle sound effects result in a pleasant experience, despite this not being the most innovative or graphically brilliant game out there. The bonus game is great too, and what we particularly enjoyed is how often it can be triggered. Then there’s the very generous multipliers of course. We’d say Jungle Jim is well worth checking out. 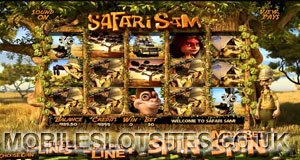 This slot is a popular little BetSoft video slot. It has been designed so that you can win as much as 250,000 coins in all, and contains absolutely stunning 3D graphics. The slot is all about little Sam, an orphan who grows up with the animals. Make no mistake about it.

This is no Jungle Book rip off. Safari Sam slot features 5 reels and 30 paylines, with players able to wager on all of them individually. Players hoping for cheap bets can stake as little as 2p per line, per spin on this slot. If you wish to push the boat out, you can wager as much as £150 per spin on this slot. For a potential return of 250,000 coins, that isn’t bad at all.

There are a number of decent special features which are worth looking at in this slot. Firstly, there are random wilds. These can appear randomly on any reels on any spin, and provide you with multipliers worth as much as 10x your total bet.

Scatter symbols appear as trees, and they can offer you as many as 1,500 coins in total. Players will pocket scattered wins when 3 or more such symbols appear in any position on the reels.

Stacked symbols can lead to collapsing wins in this game, and there is also a bonus round which involves helping Sam to identify a good spot to watch the animals. Land 3 or more watcher icons and you can choose places to travel to on the map, to pocket cash until a collect sign appears.

If players can land the Gorilla, Zebra, and Monkey icons in any combination on the first payline, then they will trigger a Wild Animal Free Spins bonus game. This bonus allows you to choose one of the trio of animals as a wild, and you’ll also pocket 2x multipliers during this bonus when you win with said symbol.

Safari Sam has tip-top graphics. It has a reasonably decent jackpot, and it allows you total control over your bets. If only it had wilds, it would be phenomenal. Even so, it is still a cracking little slot to play.