Football themed slots are becoming increasingly popular as more and more casino sites now offer sports betting facilities. This presents software developers with the opportunity to cash in on those who may have initially visited the site simply to bet their favourite football teams.

What’s more, football itself is internationally adored. This means that these kinds of slots appeal to all different players, from different countries and of different ages.

Although there are still relatively few football themed slots, especially when compared to slots of other themes, there are some brilliant titles to enjoy. What’s more, when international football competitions such as the World Cup roll around, many slots developers release new footballing themed titles.

In football themed slots you can expect:

Aside from football specific features, players can also expect these slots to come with all the regular great slots features. These include wild symbols, free spins and more.

On this page you can find out more about some of our favourite football themed slots, including information about gameplay and bonus features.

Football fans will adore Top Trumps World Football Stars  – another great video slot from Playtech where you can combine your love of football with your love of online slots, for endless fun and hopefully big wins! Play with some of the world’s best players: Rooney, Beckham, Messi, Ronaldo and more, and enjoy some of the exciting features World Football Stars has to offer.

I really like how this game begins by prompting you to customise it; you must choose two football teams to play, given a choice of Argentina, Brazil, England, France, Germany, Italy and Spain. Your choices determine the symbols you’ll be playing with during the game, and you can change your teams during your game if you wish.

The 5 reels will contain a variety of symbols including playing card symbols Ace to 9, plus a selection of famous faces from your chosen teams, and your aim is to land a combination of players from the same team, on up to 15 pay lines. For a winning combination, symbols of players from your first team must play left to right on any active pay lines, and similarly, symbols of characters from your second team must play right to left.

There is also a free games flag symbol for each team, and if you land the flags on reels 1 and 5, you will trigger the 12 instant free games with just one team on the field, massively increasing your chances of winning.

Top Trumps is the scatter symbol and must appear at least twice anywhere for you to win a prize. There is nothing particularly unique or exciting about these, however they do occur quite frequently and it’s always great to watch your winnings grow when they do.

There is also an obvious wild symbol which, very handily, will replace  all symbols except scatter, free games and bonus.

World Football Stars also offers the thrilling Gamble feature, enabled for every win, and like other Playtech games, you can bet double or double half to add a little excitement to your game!

Playtech offer some fantastic slot games and World Football Stars is no exception. Even if you’re not a football lover, this is a great game to play simply to enjoy the decent bonus features and gamble function. 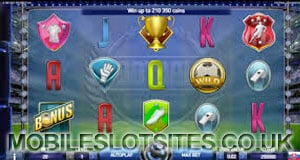 This new NetEnt developed video slot is all about football, and with this year’s upcoming summer Euro 2016 tournament, there has never been a better time to play it. Football: Champions Cup offers two of the most creative bonus rounds ever to be found in a football themed video slot, as well as cheap stakes. Players on a budget can wager as little as 20p per spin on this game, whilst flusher players can stake as much as £100 a pop on this 5-reel, 20-line slot.

The secret to success in Football: Champions Cup is to win your matches, and there are two ways to do that in this slot. The first of these is to land the scatter bonus. Scatter symbols appear as trophies, and landing 3 on the three central reels is enough to activate the bonus round. Doing so will see you able to play a free spins bonus. In the bonus, you get a total of 6 free spins. Land a wild and you will get a goal. Land a scoring wild, and your opponent does. After the 6 spins, the scores are tallied up, and the winning team advances to the quarter-finals. The process can be repeated, seeing you advance to semi-finals, and the final itself, where a big prize awaits if you keep beating your opponents in the free spins bonus.

Aside from scatters, wilds are also present in this game, and they can replace all other symbols save for bonus and scatters.

A Penalty Shoot-Out bonus is also present in the Football: Champions Cup slot. Land 3 or more bonus icons to activate that. Once it begins, players can score penalties and save penalties in a 5-round bonus. If you defeat your opponent, then you win a major cash prize plus multipliers. If you lose you will bag a consolation prize. A draw will lead you a sudden death shootout, where the first to miss a round loses.

This new NetEnt slot game is certainly going to be a big hit during the Euro 2016 tournament. However, it has enough quality to outlive that tournament, and become the number one football themed slot of all time. 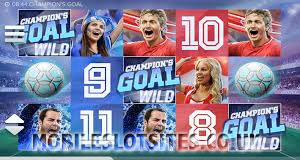 Naturally, Champions Goal is a football themed video slot. It has been designed and developed by ELK studios, and although unofficial and without license, it contains real people as graphics upon its reels. This makes the slot a little bit more believable at the very least.

There are only 20 lines spread over the 5 reels of the Champions Goal slot. Various betting strategies can be applied to your bets via the betting button, but you will end up wagering somewhere between the 20p, and £100 minimum and maximum stakes, respectively. Up to 200,000 coins can be won in this slot.

Champions Goal contains a wild icon which is the game’s title logo. This wild doesn’t do anything spectacular, save for replaces all other icons, save for ball, trophy, or ref icons.

What is worth mentioning is that blue symbols pay from left to right, whilst red symbols pay from right to left. That is most certainly a unique enough feature, and one which you may forget from time to time during gameplay.

If the player lands 3 trophies on the reels, they will trigger a Derby Free Spins bonus.

In the free spins bonus, players who land a football icons will have their win multiplied by 5x its normal worth. They can also collect free kicks to clear all of the symbols in the game. Land a trophy during this bonus, and you will bag 1 extra spin. Also, if you land a ref icon in the corner, you will bag one re-spin, with all of the four corners of the reels containing one sticky wild icon. Another nifty feature in this slot is the Cascading Tifo feature. If players can land 3×3 symbols from the same team, they will win three extra free spins.

In terms of its appearance, Champions Goal may not have the best graphics or design ever seen in a football themed slot. However, from a gameplay perspective, there are quite a few nice little features for you to enjoy with this slot.

Bicicletas is actually a football themed video slot, and is based on the football move the “bicycle kick”, sometimes referred to as the “overhead kick”. Bicicletas is themed on those players from South American, and Latin Europe. The slot is graphically pleasing – as is often the case with Yggdrasil developed slots – and contains 5 reels and 25 paylines.

Players are permitted to select coin values of 1p up to £4 per line, taking the minimum and maximum wagers in this well-timed footy themed slot from 25p per spin, up to £100 per spin, respectively. Up to 1,000 coins can be won in total via this game’s non-progressive jackpot.

A wild symbol makes an appearance in Bicicletas, although it is rather basic in appearance. Like most slots, Bicicletas wild can substitute for any other symbols in the game, barring free spin and trophy symbols.

If players land 3 or more of the scattered free spin icons (football) anywhere on the reels, they will trigger a free spins bonus round. That free spins bonus can see players pick up 8, 16, or 24 free spins for landing 3, 4, or 5 respective scatters. During the free spins bonus, any wilds that land on the screen could be transformed into sticky wilds, and remain for the duration of the bonus.

A secondary bonus feature is also present in this game. Players will need to land the trophy icon on the fifth reel. Successfully doing so in the base game will see players able to land between 8 and 12 free spins. If you land the trophy during the free spins bonus, you will be rewarded with an additional 2-4 free spins, with a wild reel feature activated.

Bicicletas launches at a very challenging time. NetEnt and other developers have also unveiled football themed slots in time for the Euros. Bicicletas certainly has some nifty features, though it may face a challenge from the Football: Champions Cup slot to be the most dominant football themed video slot machine game this summer.