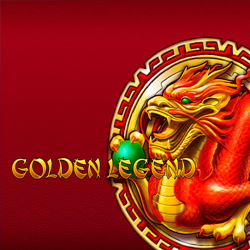 Golden Legend is a gold and oriental themed slot, and one which features animals in a new, clever, and special way. Golden Legend uses mild animation on its reels, and it contains plenty of decent pay-outs. In fact, you can win as much as 1,000,000 coins in the bonus round of this video slot, with its non-progressive jackpot.

Golden Legend is played over a total of 5 reels, but there are a massive 50 paylines for you to win with. Coin sizes can range from as little as a penny up to 40p, and you can bet as many as 5 coins per line. With Golden Legend, you’ll be looking at minimum and maximum wagers of 1p per line, per spin, up to £75 per spin.

The scatter icon in Golden Legend is represented by an emblem. When this symbol appeared three times, it will pay you 4x your total bet, as well as trigger a free spins bonus round.

Golden Legend’s wild symbol is pretty straightforward stuff. It doesn’t really offer you any winnings on its own, but it can substitute itself for all other symbols in the video slot. The exception to this rule is the scatter icon. The wild can never replace those symbols, but this is a customary rule for almost all mobile slots. 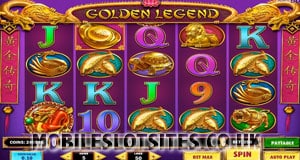 Players will get to enjoy 10 free spins in this bonus, with additional wild icons appearing stacked on the second, third, fourth, or fifth reels. The free spins bonus game can also be retriggered, but only once.

As far as slots go, Golden Legend is a rather elementary one. However, there is one point which should be made again about Golden Legend. This mobile slot does offer some pretty hefty pay-outs for lining up symbols on its reels. There aren’t really too many other simple Far Eastern themed slots which can match it for generosity. Is that enough to make you play the game, though?