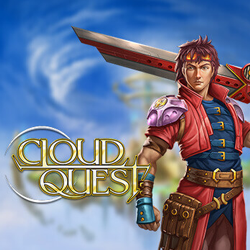 Play ‘n Go’s Cloud Quest is a fantasy themed video slot, and one which is jam packed with action, as well as a non-progressive jackpot which is worth 2,500x your total bet. The slot is played over a rather unusual gaming structure, which consists of a 5×5 grid. There are also levels in this game to contend with, making it the most realistic RPG-style video slot on the net. Cloud Quest can cost as little as 0.10 per spin, although if you wish to wager more, you can stake as much 40.00 per spin on this slot machine game.

The golden emblem acting as the Cloud Quest logo appears as a wild symbol in this video slot. As a wild, it can substitute for any other symbols in the game, with the exception of other special icons.

One such special icon is the power stone emblem. If players land 3, 4 or 5 of these symbols on the reels, they will fill up one section of the Super Power meter. When all 12 sections of the meter are filled, a random super power will be handed to the player.

Those super powers can consist of a Five of Fortune bonus (all wins are multiplied by 5x their normal rate of pay), the Emblem of Endurance (wilds remain sticky until they are involved in a win), the Scatter of Success (all symbols count as scatters), and the Mark of Multitude (all winning combinations create wilds). 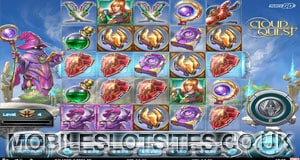 This slot’s bonus round is triggered when the word “bonus” is revealing on any row in the game. Players will start with 5-20 free spins on a smaller 3×1 reel, and they can pocket additional spins every time they defeat a monster. When you defeat opponents, you will level up and these levels ups can see you able to bag bigger and better prizes in the game.

There is something very Final Fantasy about Play ‘n Go’s Cloud Quest. Any big lover of RPG games, and other fantasy titles will be impressed with the level of depth available in the Cloud Quest slot machine game.