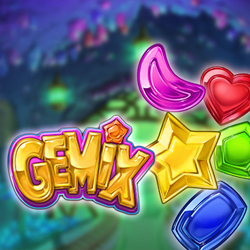 Gemix is a slot which has attracted a lot of attention to itself of late. It isn’t a conventional mobile slot by any means, and many people would scarcely count it as a slot at all.

Gemix has been designed and developed by Play ‘n Go. The game features a 7×7 grid of shape symbols. Players must matches the symbols in patterns in order to advance to the next level in the game, and so on, and so forth.

Gemix can cost anything from a minimum bet of 50p a pop, up to £100 a turn. Gemix can also reward you with a number of special features, as you seek to win a top non-progressive prize worth up to 100,000 coins.

Players must clear patterns in Gemix, by landing matching symbols on all of the indicated positions on the green radar-like map. They will then advance to the next level in the game, and there are many of those.

A few special features have also been included in the game. After winning on 20 symbols, the Crystal Charge feature will be fully activated, and it can reward you with a handful of bonuses, such as a Nova Blast (a bomb which destroys symbols), a Crystal Warp (turns symbols into other icons), Light Beam (all symbols hit by the team are transformed into other icons), and Chain Lightning (two corner symbols are connected by lighting, and all symbols hitting the chain are turned into corner icons). 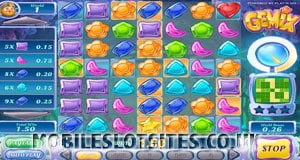 Gemix can be confusing, and it certainly isn’t conventional. Still, if you are looking for something new in the online slot world, you may wish to give Gemix’s challenging gameplay a run for its money.