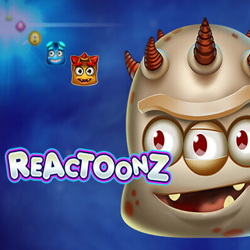 Playable on a range of devices including mobile and tablet, Reactoonz is vibrant and modern, with an unusual 7×7 grid featuring cascading reels. The aim is to round up clusters of the colourful, cutesy, cartoon aliens and trigger an abundance of bonus features, including 5 exciting quantum features.

This modern reel grid features 4 higher value extra-terrestrials alongside 4 lower value ones. The extra reel symbol is the vortex wild, which substitutes all other symbols to help create winning combinations.

The cascading reels in Reactoonz contribute significantly to gameplay; when a win is awarded, the winning cluster of symbols is removed to allow new symbols dropping onto the reels. This provides an opportunity for a multitude of wins from each spin, as the cascade continues until there are no new winning combinations formed. 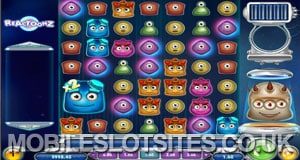 There are plenty of bonus features to tell you about in Reactoonz, including 5 quantum features.

You’ll notice to the right of the grid there is a Quantum Leap charge meter – as you win, the 5 charge meters are increased one by one. When fully charged, a quantum feature is randomly added to the queue:

In addition to the quantum feature, the Gargantoon feature is triggered if all 5 meters become fully charged. The Gargantoon randomly places a 3×3 wild on the grid and with each cascade, it divides to become smaller wilds.

During non-winning spins, the Gargantoon can also drop 4-8 wilds randomly on the grid to help form wins. This is the Instability feature. When 4 matching adjacent symbols in a 2×2 square appear, the Giantoonz feature is triggered, meaning that the win is doubled.

The final feature is the Fluctuation feature, whereby a random low value symbol is marked as a fluctuating symbol during a spin. If it forms a winning combination, it will leave behind 2 wilds on the grid.

In the first instance, Reactoonz may seem a little complex but this assumption quickly subsides during gameplay. Reactoonz is a fun, entertaining and thrilling high variance slot that we highly recommend.