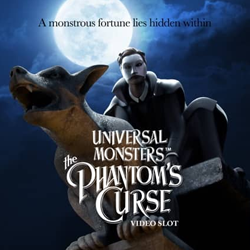 You might remember back in Summer 2017, many of us were greatly anticipating the release of NetEnt’s brand new online slot based on The Phantom of the Opera. However, release was mysteriously delayed…until now, that is.

Say hello to Universal Monsters: The Phantom’s Curse; the latest online and mobile slot from NetEnt. It may have a different title, but this is the same Phantom of the Opera slot whose release date was delayed. Something to do with a copyright battle brought about the resulting name change, or so we’re told.

Anyhow, it’s here, it’s powerful and it’s by NetEnt, so great things are expected. The Phantom’s Curse is set in the theatre and set alive by dramatic, sad and intense music that stirs up even the deepest of emotions. There are 5 reels and 40 pay lines, as well as three stimulating bonus features.

The highest value symbol upon The Phantom’s Curse reels is, of course, the phantom. Second to him is Christine (a character from the musical), followed by a ring, a mirror and a dagger. Lower value icons include hearts, clubs, diamonds and spades. Wild symbols will substitute all other symbols apart from scatters and bonuses.

There are 3 bonus features to aim for. The first is a Click and Reveal bonus game, triggered when stacked phantom lands in full on the first reel, alongside the stacked Christine symbol landing fully on reel 5. There are 2 stages to the bonus game; during Stage 1 the player must click and reveal from a selection of 8 roses. The roses could reveal coin wins or a blocker symbol; revealing a block will move player up to stage 2.

Landing the stacked phantom fully on reel 1 and the stacked mask fully on reel 5 will trigger the Masked Phantom Re-Spin. The triggering symbols and any other bonus stacked symbols will all turn into wilds and stick for one free re-spin.

With a superb theme, a spectacular soundtrack and a few excellent bonus features, NetEnt’s The Phantom Curse is everything we expected and more. A grand musical phenomenon turned into an online and mobile slot and highly recommended.