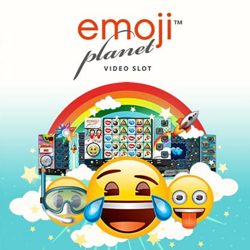 You guessed it, slot wizards NetEnt have jumped on the emoji train and created an exciting and relentlessly cheerful slot game filled with cheesy music, smiley faces and lipstick kisses galore. In this happy-go-lucky magical land of emoticons, you can find balloons, unicorns and the cheesiest music imaginable.

With every detail covered, even the ‘Total Win’ box is designed to resemble a friend typing out a message. Emoji Planet is quite unique in its design; the reels make up a 6×5 grid jam packed full of cutesy icons, and there is a Cluster Pays feature to keep you gripped. Keep reading for all the details.

As you can guess, these distinctive pictographs make up the reel symbols in Emoji Planet. Anyone who uses technology will know each and every symbol: the crying with laughter smiley, the alien, the poo smiley, the rocket, the red kiss mark, the pizza slice, the bomb and the two blue hearts. The make up the grid of symbols, with the crying with laughter emoji the highest paying (and so it should, it is quite clearly the best emoji to exist).

There is also a wild symbol – a golden star – which can land anywhere on the reels. The golden star wild substitutes all symbols in the game.

Emoji Planet has a Cluster Pays feature – something you may have come across in NetEnt games before – whereby a symbol can help to form a cluster if it is vertically or horizontally adjacent to an identical symbol. Land 5 or more within a cluster and you’ve got a win. 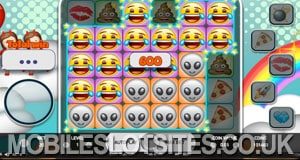 You’ll notice as you play Emoji Planet that to the right hand side of the reels are five emoji meters which fill up as emojis form winning clusters. These are the Bomb meter, Pizza meter, Kiss Mark meter, Rocket meter and the Two Hearts meter. When the emoji is filled up by 12 spaces, a corresponding feature will be activated.

There is an abundance of exciting, random features to add to this happy-go-lucky, on trend slot game. Despite being maybe just a little overbearingly cheerful, it is hugely enjoyable nevertheless. Many smiley faces and a big emoji thumbs up from us.