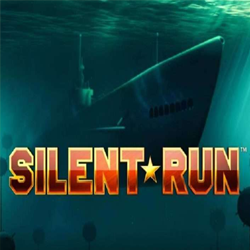 Silent Run is a suspenseful online slots game by NetEnt, based on an atmospheric underwater battle involving submarines, torpedoes, sea mines and lots of warfare imagery. It’s dark, thrilling and eerie, with superb graphics that really come to life within the game’s bonus feature.

Silent Run offers players the chance to win a huge 250000 coins upon 5 reels, 3 rows and 25 fixed pay lines. Reel 3 is the one to watch; the symbols landing here are your key to the exciting bonus game and additional wilds.

The 5 reels of Silent Run are set within the murky depths of the ocean; a terrifying place even without the prospect of submarine warfare. The icon imagery suits the game to perfection. You’ll see submarines, a war ship, torpedoes, sea mines and depth charges. Furthermore, there are classic playing card symbols making up the lower value icons. 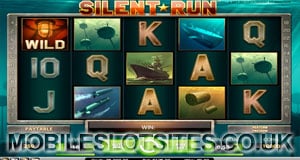 Landing the green Echo Bonus symbol anywhere on the central (third) reel will begin Silent Run’s exciting bonus game. If you’re anticipating free spins then you may feel an initial disappointment, however we are sure that the Green Echo Bonus will make up for it. The suspenseful atmosphere, sound effects and graphics really stand out in the bonus. Firstly, the Echo Bonus symbol will send out 3 sonar signals, in order to search the reels for hidden torpedoes. The symbol will detect up to 5 torpedoes, each containing a multiplier value.

The second part of the bonus game displays enemy ships, of which you must take aim and fire your torpedoes at to reveal a prize. When a ship is destroyed, your prize will be revealed and will be multiplied by the particular multiplier value of the torpedo used.

The Echo Wild also adds a small bonus feature if it lands anywhere on the third reel. This will send out 3 sonar signals, similar to the Echo Bonus, but this time will detect and reveal hidden wilds. This, of course, boosts your winnings.

Silent Run is a seriously impressive game filled with suspense, thrills and fantastic graphics. Furthermore, there is a really great bonus game on offer. We don’t describe online slots games as a “must-play” too often but this is definitely one of them.