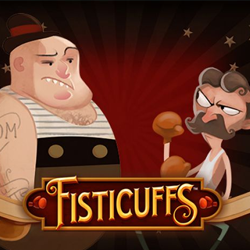 Fisticuffs is a slang term for a fight, or a boxing match. It should come as little surprise then that the latter has been chosen as the theme of this non-progressive jackpot slot.

With 100,000 coins to offer players, Net Ent’s Fisticuffs Touch is the touchscreen mobile version of this popular online slot, although in principle, it is pretty much the same game, with the exception being that you play it with your fingers instead of your mouse.

Fisticuffs Touch is played over 5 reels and just 10 paylines, with players able to choose coin values of 1p up to £1, and stake between 1 and 10 coins per line. Minimum and maximum wagers are fixed at 20p and £200 per spin respectively in this slot.

Special features are pretty much a given in this slot, and plentiful, too. The fat boxer is the straight wild, and it can only appear on the third reel. The diagonal wild is represented by the skinny boxer, and it appears on reels 2 and 4. Wilds can substitute themselves for any other symbol in the game. 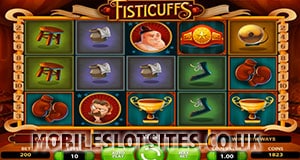 There is also a standard wild in this slot, and that appears stacked. Stacked wilds only appear on the first and fifth reels and only during a re-spin. They too can replace any other symbols in the game, and they are pretty common in the re-spin bonus, and so therefore quite valuable. It’s wilds all around then, really.

Fisticuffs Touch is a nice little slot, with some one of a kind features. True, there isn’t really a free spins bonus round, which is a bit of a shame. However, the surplus of stacked wilds which appear during the re-spins is something to marvel at. They certainly help you on your way to winning that 100,000 coin non-progressive jackpot.