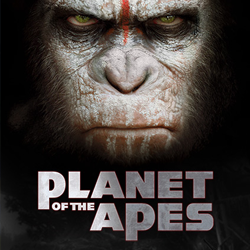 Let’s take a look at one of NetEnt’s most exciting new releases: Planet of the Apes online and mobile slot. As you might have guessed, this slot game is based upon the blockbuster movies in which intelligent apes clash with humans. Just like the movies, the slot game is atmospheric and dramatic, with sharp, sensational imagery that will capture your attention throughout.

Each play area has separate symbols, but the apes are the highest value in each, followed by the humans. The playing card symbols are the lower value icons. The Rise area features a golden wild, which will substitute all symbols In Rise but the bonus and scatter. The scatter is the Rise of the Planet of the Apes symbol; if 3 or more land, a win is awarded. There is also a Rise bonus which leads to the bonus game.

In Dawn area, there is a red wild which substitutes all Dawn symbols except scatter and bonus. The Dawn scatter symbol awards a win if 3 or more land, and the Dawn bonus can lead to a second bonus game. 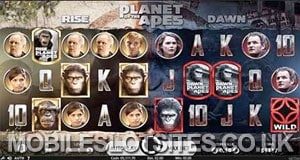 If the Rise bonus symbol lands on Reel 1, the Rise Bonus is activated. There is an extra coin win for every ape and human symbol on screen in the Rise area.

If the Dawn bonus symbol lands on the last reel, the Dawn Bonus triggers. This transforms all Dawn apes and humans into the same symbol.

A Stacked Wild Feature can be triggered when a reel becomes fully covered in wilds in the Rise area. This reel becomes duplicated into the corresponding position on the Dawn area for additional wins.

Finally, there are 2 free spins games. Rise Free Spins triggers when 3 or more scatters land. 10 free spins are awarded, with any wild icons that land being collected and placed back on the reels in the final spin.

We expected excitement when it came to Planet of the Apes, and we’re delighted that NetEnt have once again surpassed our expectations. This is a truly thrilling, fast-actioned game with an abundance of features that don’t overcomplicate gameplay or detract from an excellent theme. Another blockbuster; well done NetEnt.