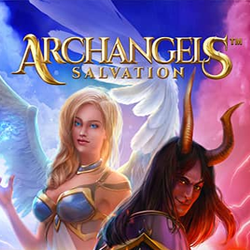 Prepare for a battle of epic proportions in Archangels: Salvation; a brand new slot game release from NetEntertainment. NetEnt take online slots to another level in their latest development, where good takes on evil in an intense war featuring angels, demons and an incredibly atmospheric game.

NetEnt’s latest game features 6 reels and 100 bet lines, with the good Angel to the left of the reels, and the evil Demon to the right. There are HotSpot areas, 2×2 wilds and simply spectacular graphics guaranteed to keep you completely mesmerised by this innovative slot game.

The Angel and the Demon also feature upon the Archangels reels; both being the highest win symbols, alongside other high win icons including skulls and lions. The card symbols are the lowest value.

The wild symbol will substitute all other symbols apart from the scatter. Wilds can appear as a block of 2×2 symbols, and stacks and singleton wilds; although the latter two are generated during the special Heaven and Hell features only.

As you spin the reels, you’ll notice that there are 2 selected areas at the top and bottom of the reels. These are HotSpot areas. If a 2×2 wild block lands fully or partially in either area, either the Heaven or Hell feature is activated. 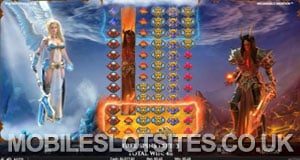 Land a 2×2 wild block fully or partially in the hotspot area at the top of the reels, and the Heaven feature is triggered. If the block lands partially, two wild stacks are produced. If it lands fully, four wild stacks will appear.

Land any further 2×2 wilds in the hotspot areas, and the features can be retriggered.

Archangels: Salvation is intense, gripping and everything we expect from a new NetEnt release. Gameplay may initially seem fairly complicated but in fact, the game is quite simple to play after a few spins of the reels. This slot comes with some great bonus features and is highly recommended.