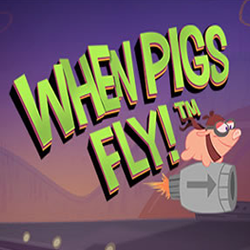 When Pigs Fly is one of the most bizarre video slots to ever be released by Net Entertainment.

The game actually contains graphics which aren’t too out of place with something from a Looney Tunes cartoon. Its gaming structure is also quite unique.

When Pigs Fly is played over 5 reels, but there are just 1, 3, 5, 3 symbols, and 1 symbol appearing on the first to fifth reels, respectively. Another remarkable feature about this 5-reel video slot is that it is played over a total of 3,215 paylines (at times). Don’t worry, though, wagers are still incredibly cheap in this game, and shouldn’t cost you much more than 25p a pop.

Play When Pigs Fly Slot at

You won’t get access to all 3,125 paylines at once. That would make the video slot too easy. Instead, players will start out with just 45 paylines (although they will still get a great deal on the paylines). There’s some good news, though. You didn’t seriously think that NetEnt were going to give you 3,125 paylines for a 25p stake, did you?

Any single winning spin on the When Pigs Fly video slot will trigger a re-spin. It is on that re-spin that the number of paylines you have open to you will expand. This slot will also contain a free spins countdown feature, which we’ll come to just now. 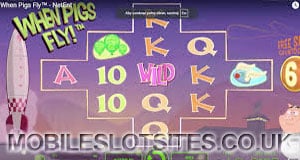 When Pigs Fly is not actually due for release until then middle of July (July 12 to be exact), so some of the slot’s features remain hidden from us, as does the true nature of its wagering structure. From what we can tell already, though, this is shaping up to be one of Net Entertainment most original and creative video slots ever, and it should do remarkably well when it is released this summer.