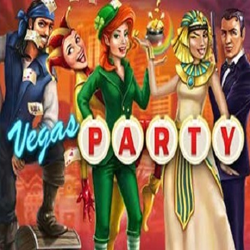 It’s buzzing with the glitz and glamour of Las Vegas, featuring a luxurious palm tree setting and awash with lights and colour.

There’s 243 ways to win in this cheerful 5 reel slot that is sure to get you in the party mood. Featuring dance tunes galore as you spin the funky reels, you can enjoy NetEnt’s special Linked Reels feature and aim to bag the whopping 270,000 coins on offer. Read on to discover more about the slot game that could liven up your Saturday night!

The golden reels of Vegas Party present an abundance of exciting characters – ones we’d love to see at any party! Firstly, there’s a Joker – she’s the wild of the game and will substitute for all other symbols. The Joker wild only appears on the second, third, fourth and fifth reels. There’s also a poker chip with a lion in the middle, characters who we are guessing must be a winking Cleopatra and James Bond, plus an Irish lady and a grinning pirate. Joining these are traditional playing card symbols from Ace through to 9. 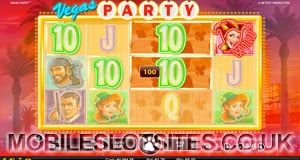 Vegas Party doesn’t offer a bonus feature as such, so you’re a free spins seeker then you may be disappointed. However, the highlight of Vegas Party is the Linked Reels feature – a feature seen every now and then in a few NetEnt games. The Linked Reels aspect of the game begins with each spin containing a couple of adjacent reels that are linked together. The reels that are linked will be identical, and as the reels spin, the linked reels can even expand, potentially creating a bigger and better winning combination. As this occurs during every spin, it can feel like Vegas Party is just one big bonus feature!

Vegas Party is a relatively simple game compared to many modern and innovative online slots, in terms of gameplay and graphics alike. However, it’s cheerful, funky and upbeat – and if you love Linked Reels then you’re going to love it. There’s a decent RTP of 96.6% too, so we’d encourage you to check it out.