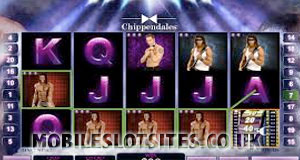 Microgaming may have developed their Playboy slot for the gents, but this Playtech developed slot is very much for the ladies in the online slot gaming world. The Chippendales slot is an officially licensed game, and features elements of the famous male strippers as imagery on its reels.

The slot itself is played over 5 reels and 20 paylines, with players able to control those lines and line bets. The latter range from a penny up to £50 a piece, with players able to choose minimum and maximum wagers of 1p per line, per spin, and a whopping £1,000 per spin, respectively. You can win 1,500 coins on a single spin when playing this game.

Players can use the necktie and cuffs as a wild symbol in Chippendales. These wilds can only appear on the second, third, and fourth reels, but can replace all other symbols in the slot, save for the scatter and spin bonus icons.

The scatter is the group of gallivanting gents themselves, and they can appear on all of the reels of the game. Land 3, 4, or 5 in any position, and you will win 3x, 10x, or 100x your total bet, respectively.

A Sizzling Spin Bonus icon is also present in this slot. If you can find it on the first, third, and fifth reels at the same time, you will trigger a bonus round of the same name. In this bonus, players can watch a Chippendale spin the money wheel where it lands will see you win a prize which will offer you a total bet multiplier.

The Chippendale icons start out clothed, but as they appear in winning combinations, they move onto less and less clothes. These lesser clothed men are worth considerably more than their clothed counterparts. After reaching the third type of symbol (the lads will be in the buff), then symbols return to their clothed state.

This is the ideal slot for any lady who likes a bit of beefcake in her slot gaming. The slot is not crude, and is actually genuinely good fun. Many male casino slot lovers may not be too impressed with Chippendales, though, at least visually.