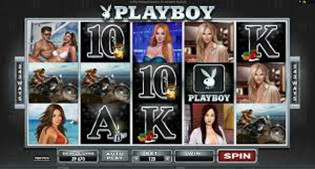 As you might expect with a game that has this theme, you’ll see several lovely ladies among the symbols, as well as such signs of luxury as a fancy car and a jet ski.

Of course you can have a good time as well as a profitable time playing this game even if you’re not interested in those symbols. You can win more than a million coins when you’re playing Playboy Slots.

Both Playboy Slot mobile and online have five reels and 243 ways to win. Every spin you take can cost anywhere between 0.30 and 15.00.

The Wild symbol in this game is the Playboy Bunny. It replaces all symbols except the Scatter symbol and it also offers a payoff of 5,000 coins if you get five Wilds on one line.

The Scatter symbol in the game is the Playboy Magazine. You need at least three of those symbols to trigger the bonus round. You will then be given a chance to play several bonus games, all named after one of the slot’s lovely ladies.

You can begin with the Kimi bonus. It has 10 free spins and a 5x multiplier. Once you’ve triggered that bonus feature five times, you can then play the Sofia bonus which includes 15 free spins and a running Wilds feature that gives you an extra Wild per spin.

Once you trigger the Sofia bonus five times, you can then claim the Ashley bonus. it offers 20 free spins plus a Rolling Reels feature that increases the multiplier after every win. The final bonus is called Jillian. You can get to that round after you trigger the Ashley bonus five times. jillian offers 25 free spins. Any and all of the reels can turn completely Wild on any spin thanks to the Wild Night feature which is a part of the Jillian Bonus.

This Microgaming slot does not disappoint, with all the glamorous and attractive images you would expect. Plus it has several bonus games which can put a lot of money into your account.