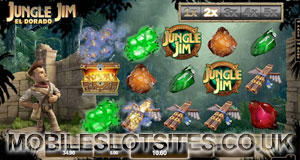 Jungle Jim is back; this time he’s on a quest within the South American jungle with a brilliant new slots game full of native treasures. It’s called Jungle Jim El Dorado, and this brand new Microgaming release features 5 reels, 3 rows and 25 fixed pay lines. Set deep within the hazy, humid and bustling rainforest, Microgaming have managed to set the scene tremendously with incredible graphics and life-like chirping and buzzing sound effects. The hero, Jungle Jim himself, stands to the side of the transparent reels; watch out for some of his actions. It’s possible to win up to 92,000 coins in this modern slots game that offers a free spins bonus round, Rolling Reels and Multiplier Trail feature.

The Jungle Jim El Dorado reels display a variety of South American treasures including a totem pole, a treasure chest and some rare, colourful gems.  There is a circular scatter symbol which is the key to the bonus game, plus a logo wild which substitutes all symbols but the scatter.

One of the key features of the game is the Rolling Reels element; you may have come across this in one or two other Microgaming slots. The symbols fall into place on the reels rather than spin, and if a winning combination is created, those symbols disappear and further symbols fall into their place. This allows an opportunity for further wins and is therefore a fairly popular feature.

Finally, the bonus game of Jungle Jim is 10 free spins, which is retriggerable. The bonus round is activated by landing 3 or more scatters, and of course is enhanced by the exciting Multiplier Trails feature as stated.

Jungle Jim El Dorado is a vast improvement on Microgaming’s older version, Jungle Jim. It is modern, sleek and sophisticated with impressive graphics and exciting features. Finally, if you love Rolling Reels, you are sure to love this game – and if you haven’t tried out Rolling Reels yet, what are you waiting for?