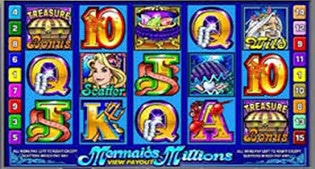 This game doesn’t exactly live up to its name, since the most you can win playing this slot is 7,500 coins. But that’s still a quite substantial payoff for this entertaining game from Microgaming. It explores the depths of the ocean and displays both mythological symbols such as King Neptune as well as some real undersea creatures including a Seahorse and a Giant Clam.

Mermaids Millions mobile and desktop has five reels and fifteen paylines. You can play each line with as many as five coins and they can be worth anywhere from 0.01-5.00. The biggest bet you can make on any spin is 375.00.

The Wild symbol in this game is King Neptune. He is a smiling, bearded fellow who is wearing a rather unusual crown, apparently designed for undersea wear. The Wild symbol substitutes for all symbols except the two bonus feature symbols.

In addition to serving as a Wild, King Neptune is also the highest paying symbol in the game. Get five Kings on one payline and you will collect 7,500 coins.

There are two Scatter or bonus symbols in Mermaid Millions slot. One of them is the Mermaid Scatter symbol. If you get three of them at one time, you will win 10 free spins and any winning payoffs you get during those spins will be tripled. You can win additional free spins if you get at least three more Mermaid Scatters during a free spin.

For those who enjoy playing a game with a deep sea theme, Mermaids Millions delivers. And even if you’re not looking for that type of slot, you’re bound to enjoy the big payoffs that are possible in both of this game’s bonus rounds.