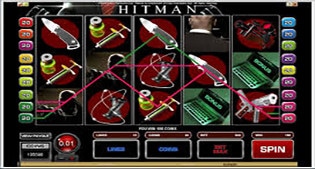 Microgaming have created a handful of video slots based on successful video games, and Hitman is a prime example of that. Hitman is a few years old now, but that hasn’t stopped it from being a success. The video slot is quite faithful to the original console release, but only offers you 15 paylines to play with.

Players can take control over how their wagers are placed, though. Coin denominations of 1p up to 25p can be bet, and up to 20 coins can be staked per line. You are going to be looking at wagering anything from a floor bet of 1p per line, per spin, up to a ceiling bet of £75 per spin. With a little luck, you can win as much as 4,000 coins in this slot, via its non-progressive jackpot.

The Hitman himself makes an appearance as a wild in this game. If the wild appears on the second, third or fourth reel, then it will expand to cover the entire reel. Wilds cannot replace scatter or bonus icons.

If a player lands three or more of the insignia scatter icons on the reels (in any position), then a pick and win bonus is triggered. It won’t add much to a player’s winnings, but it’s something.

Far more rewarding is the mission bonus, which is awarded when a player lands three, four or five bonus symbols on the reels. In this bonus, players can choose from a series of targets to trigger a mission. Players will pocket two cash prizes, as well as a multiplier in this bonus.

There is a free spins bonus in Hitman, and it is triggered if a player lands three or more of the “18” game rating symbols in any positions on the reels. A total of up to 18 free spins can be won, with all winnings doubled.

Hitman has plenty of cool and nifty features for you to enjoy. Even if you aren’t a fan of the video game, there are enough captivating bonuses in Hitman to lure you in. Our only regret is that Hitman could have done with a few more paylines.