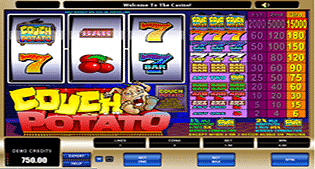 Couch Potato isn’t the most faithful one-armed bandit about. The game has taken the old formula of classic slots, and revamped it, turning it into something more modern. This is a classic slot which has wilds, and it has multipliers, too. Couch Potato is, of course, one of Microgaming’s titles, and it still retains some elements of the classic slot genre about it.

For instance, it is played over 3 reels, and features just a single payline for you to win with. This also makes Couch Potato dirt cheap, as you might imagine. Players can choose coin values which stem from 25p up to £5, and they’ll be able to bet up to 3 coins per spin. At its least expensive, the slot will cost you just 25p a pop. If you want to push the boat out, you can wager up to £15 a spin on this non-progressive classic slot.

There aren’t many special features in Couch Potato, but that shouldn’t exactly come as a surprise, since this is a classic slot. Couch Potato does have wilds, though. The wilds in this game are represented by the Couch Potato symbol, and can replace all other symbols in the slot. You’ll also need three of them to win the non-progressive jackpot, which stands at 15,000 coins if you’re playing with a maximum stake spin.

Couch Potato is nice because it is simple. Microgaming have chosen to take an older style of slot gaming, freshen it a bit and make it up to date, and have also thrown in a couple of new tricks. Couch Potato isn’t going to blow you away, but it will give you hours of fun.