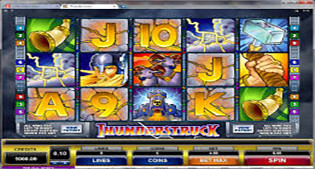 One of Microgaming’s first true hits, was Thunderstruck. This early release is a Norse mythology themed slot, and although it may look dated now, it still provides plenty of excitement to casino gamers across the web.

Thunderstruck is a simplistic 5-reel, 9-payline video slot, which comes with a reasonable non-progressive jackpot. It also permits dirt cheap wagers. The video slot features coin denominations of 1p up to £1, and up to 5 coins can be staked per line. Paylines are adjustable, and this gives Thunderstruck a floor bet of just 1p per line, per spin, and a ceiling bet which is capped at £45 per spin.

Thor is a magical icon in Thunderstruck. Should this god appear, it will substitute itself for any icon in the game, and double the value of all winning combinations in which it appears. The symbol is also the jackpot paying icon, if 5 are struck on any active payline.

The rams make up the scatter icon. As well as picking up scattered wins of 2x, 5x, 20x or 500x your stake, for 2, 3, 4 or 5 scatters, respectively; you will also pocket 15 free spins for 3 or more scatters appearing anywhere on the reels.

Once the free spins bonus has been triggered, the player will get to play for free for a minimum of 15 spins. They will pocket triple the winnings for all winning combinations acquired during the bonus round. You can even retrigger the bonus (giving you another 15 free spins), by landing a further three scatters during this bonus round.

Thunderstruck was one of Microgaming’s first truly successful video slots. It spawned a sequel, Thunderstruck II, which would be even greater in popularity. Although aged slots tend to be removed from online casinos as time passes; Thunderstruck has always remained in the hearts of casino slot players the world over, and makes up an intricate part of Microgaming’s gaming catalogue and heritage. It can still be found at all the top online casino sites offering Microgaming software, today.