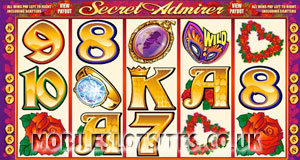 There are no prizes for guessing the theme of this mobile slot. Yes, Secret Admirer is a romance and valentine’s theme mobile slot game. It is one of Microgaming’s older titles, as you may probably guess from the dated imagery it contains.

Secret Admirer is played over 5 reels, and it offers a total of just 9 paylines for you to win on. Coin denominations range from 0.01 up to 1.00 in all, and players can bet anything from 1 to 10 coins per line. At its cheapest, the slot will only cost you 0.01 per line, per spin. At its most costly, it can set you back around about 90.00 a pop. You can win as much as 5,000 coins via Secret Admirer’s non-progressive jackpot.

A masquerade ball mask is Secret Admirer’s wild symbol. This substitute icon can replace all other symbols save for scatters, and is also the symbol you need to win the non-progressive jackpot, by lining up 5 such icons on a payline.

The scatter symbol in Secret Admirer is a diamond ring. When icon appears 2, 3, 4 or 5 times anywhere on the reels, the player will pocket scattered wins of 2x, 6x, 20x or 50x their total bet. Scatters can also be used to trigger a free spins bonus.

A gamble feature has also been included in this slot, although your chances of success are only 50% or less. It isn’t really worth using this feature.

If you locate 3 or more scatter icons, then you will trigger a free spins feature. A lowly 3 free spins are offered to you in this bonus, which doesn’t really get you very far at all. Scatters can restart the feature a total of 3 times, but these are hard to come by. Ultimately, this is a fairly disappointing bonus round.

The free spins bonus is pretty poor in Secret Admirer, but the slot is old, so we are supposed to forgive that. With so many icons appearing on the reels, and only 9 paylines in total, the chances of this still being a crowd pleaser are quite small, but you never know.