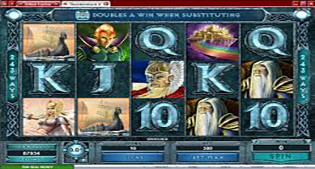 Thunderstruck II is the direct sequel to Microgaming’s original video slot hit, Thunderstruck. This slot became hugely popular when it was first released all those years ago, and still is popular today.

Based on the same Norse mythology theme as its predecessor, Thunderstruck II contains far better graphics. The slot is played over 5 reels and includes Microgaming’s inventive 243 ways to win payline structure. Coin sizes can fluctuate from 1p up to 5p in this slot, with players able to bet up to 10 coins per spin. At its cheapest the slot costs just 30p per spin, whilst at most, it will set you back no more than £15 per spin.

The Thunderstruck II logo acts as this slot’s wild symbol. As a wild, it can replace all other symbols in the game, except the scatter. Wins with wilds will also be doubled.

Thor’s Hammer (Mjölnir) is the scatter icon in Thunderstruck 2. Should the player land 3, 4 or 5 of these icons in any position on the reels, they’ll trigger the Great Hall of Spins bonus.

It is also worth mentioning that Thunderstruck II contains a Wildstorm feature. This randomly triggered bonus can occur at any time, and can turn up to 5 reels wild, resulting in massive wins.

Upon entering the bonus round the first time, the player will land 10 free spins, with all winnings multiplied by 5x their normal value, thanks to the Valkyrie bonus. Enter five times, and the Loki bonus ensures that players get 15 free games, with a random wild feature.

Thunderstruck II is still a legendary online slot machine game. It was one of the first slots to feature the 243 ways to win structure. Until Microgaming release Thunderstruck III (if they ever do), this title will continue to be the definitive Norse mythology themed slot on the net.