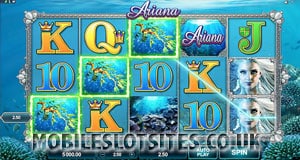 Ariana is one of the hottest new slot games to be released by Microgaming. There is a distinct mermaid theme to this new slot, which has shrugged off Microgaming’s traditional 5-reel, and 243 ways to win payline structure, in favour of a 5-reel, 25-line setup.

Ariana – being a modern slot – of course features decent graphics, although the tried and tested (if aged) high playing card icons also appear in the game. Ariana’s paylines are locked into place, although players can choose coin sizes of 1p up to 50p, and stake up to 10 coins per line. Minimum and maximum wagers range from 25p a pop, up to £125 a spin in this underwater adventure themed slot, which contains a non-progressive jackpot worth 30,000 coins.

Ariana’s logo is the wild icon in this game, as well as a decent paying symbol. It can replace all other symbols in the base game, save for the scatter icon. That scatter is represented by the purple starfish icon. We’ll discuss that scatter a little more in just a moment.

Ariana contains an expanding symbol feature, which makes it unique. Should a player get any full symbol on the first reel, it will then expand all matching high symbols on the remaining reels. They’ll only do this when they are part of winning combinations, though.

The purple starfish scatter icon will trigger a free spins bonus game of 15 free spins, but only if 3, 4 or 5 appear anywhere on the reels. During this bonus round, the Ariana wild logo is stacked on the first reel. Also during this bonus, wild icons can be transferred across to the other reels via the expanding symbol feature. This can result in some fairly big-money wins coming your way, with a little luck, of course.

Ariana is a very beautiful slot, but it is also a fairly original one. There are many underwater themed slots out there, and most of them are fairly predictable. Ariana offers a variety of unique features, as well as better pay-outs than many of those other similarly themed games.