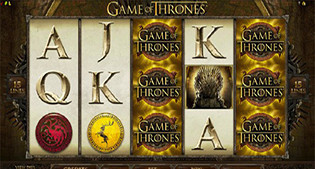 This video slot is, of course, based on the hit television series of the same name. Two versions of Microgaming’s Game of Thrones slot exist. There is a 15-line game, and a 243 ways to win version. Aside from how many paylines they feature, and what it will cost you per spin, there is virtually no difference between them.

For the sake of argument, we’ll be looking at the 5-reel, 243 ways to win slot. Players can choose coin values which start out at just 1p, and can be raised as high as 10p, with up to 10 coins available to wager per spin. At its cheapest, you can expect to play Game of Thrones for just 30p a spin, whilst it won’t set you back any more than £30 a spin when playing on the maximum wager. Game of Thrones is a non-progressive slot.

The Game of Thrones logo is this slot’s wild. Wilds appear stacked on the reels, and replace all other icons in the game, barring scatter symbols. Wilds also happen to be the best paying symbols in the slot.

Scatter icons are represented by thrones. Players will not only pocket scattered wins when they land 3, 4 or 5 of these scatters, but they’ll also trigger a free spins bonus game.

Players will get to pick their own bonus in Game of Thrones. Four free spin bonuses are available to select, each represented by a house from the television show, and with its own perks. Players can choose between 8 and 14 free games, with multipliers that range from 3x up to 5x per bonus game. Each bonus game will use its respective crest as a stacked icon in the free spins bonus.

Microgaming made a bold decision to release two versions of this slot. Of course, with the popularity of Game of Thrones, this slot has already become huge. Whichever version you play, you are certainly in for a treat with this special feature laden online slot machine game.