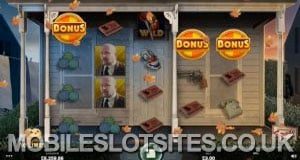 Halloween: it’s the ultimate classic horror movie featuring its most famous character, Michael Myers. The original 1978 slasher movie has been one of the leading titles in its genre, and so it comes as no surprise that an acclaimed gaming provider has decided to develop an online slot based upon the thriller itself. All while in the lead up to that time of year, Halloween 2017. In fact, we’re just surprised it hasn’t been created earlier.

So hats off to Microgaming who are responsible for Halloween online and mobile slot. As sinister and dark as you could imagine, the game is full of spooks, eerie music and visuals directly from the movie. The game is designed particularly attentively, with the reels sitting upon the front decking of the distinctive Halloween house. Halloween features 5 reels, 50 pay lines and a few thrilling bonus features to add to the thrills and scares along the way.

The symbols feature the characters from the movie: Laurie, Loomis, Annie and Lynda make up the higher value symbols. A few nerve-wracking items such as a gun, knife, clown mark and telephone are some of the lower value symbols; then you’ll find a bonus symbol and a wild that substitutes all but the bonus.

One of the interesting elements of Halloween and one that works really well with the game design is the wandering reels feature. At all times in the main game, a group of 3 reels that spin simultaneously, can change position on screen. The position of the wandering reels determines the pay lines played, and these reels can also contain jumbo blocks – large symbols which cover multiple reels at once.

Landing 3 bonus symbols anywhere on the Halloween reels will trigger the first part of the bonus feature: the Trick or Treat Wheel. Spin the wheel to collect cash prizes and determine the next step of the bonus; either the Free Spins or the Boogeyman Bonus.

Landing on a movie character will trigger 9 free spins, with the triggering character featured on the reels. Land on Michael on the Trick or Treat Wheel and begin the Boogeyman Bonus. Choose from a selection of autumn leaves to reveal cash prizes. Just beware of coming face to face with Michael…

Chilling and menacing, this is a real frightful online slot in comparison with the usual cartoon-style Halloween slots we are so used to playing at this time of year. The atmosphere is spot on, the wandering reels add an extra thrill and the bonuses are quite exciting while they last. A definite treat from Microgaming.