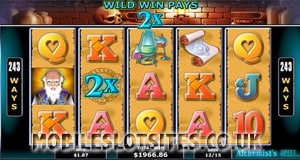 This is the second alchemy themed mobile slot to be released by Playtech. It features a cracking 243 ways to win payline structure, and offers numerous ways to land big wins. Unfortunately, its graphics aren’t exact out of this world. In fact, the dull high playing cards give the game a rather tired and dated look.

The Alchemist’s Spell slot allows you to stake anything from a low of 30p per spin, up to a maximum stake of £750 a spin. When playing with the maximum wager, up to £37,500 can won on this game. Smaller stakes equate to smaller non-progressive jackpots, as you may have guessed.

The wild icon in The Alchemist’s Spell slot can substitute itself for all symbols in the game, without exception. Wilds can only appear on the second, third, and fourth reels, though. Wins containing one or more wild will be offered wild multipliers, which range from 2x up to 30x the normal rate of pay.

There is only really one additional special feature in this game, and that is the red crystal icon. It can offer a free spins game.

The red crystal is the trigger symbol, and also the best paying icon in the game. When it appears 3, 4 or 5 times anywhere on the screen from left to right, the player will bag 10, 15 or 20 respective free spins in the bonus round.

You aren’t exactly going to be overwhelmed by what you find in The Alchemist’s Spell (in terms of special features). There can be no denying that its wild symbols are mightily powerful, though. You can use them to pocket plenty of big money wins, via massive multipliers. Although The Alchemist’s Spell does look dated, and doesn’t contain the most numerous special features; this is still a slot which may interest a number of online casino players.