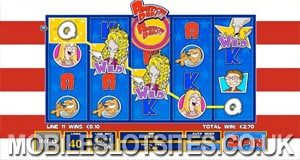 It’s not uncommon for slot gaming vendors to use popular films and TV shows as their theme, and keen gamblers tend to love the entertainment value of this genre of slots. Playtech have come up with an exciting new slot to add to their TV themed collection and this one’s based on Seth MacFarlane’s huge cult show, American Dad.

American Dad is a popular animated sitcom aimed at adults; often resulting in roaring laughter at the quirky characters and real-life like scenarios with quick-witted punchlines. Its creator is that of Family Guy, which should give you an idea of the type of humour American Dad has to offer if you have never seen it.

So, this award-winning show is now available as a 40 pay line online slot, with 5 reels and 4 rows, with some great animations involving the best characters. There’s also an abundance of features to keep you entertained, whether you’re an American Dad fanatic or not!

As you can probably guess, American Dad’s reels are filled with characters from the show; these include Stan, Francine and Hayley, plus a few classic playing card icons as the lower value symbols. Roger the alien is the wild symbol, substituting all symbols in the game apart from the Schmooblydong Wheel. The Schmooblydong Wheel triggers a variety of interesting bonus features.

Landing the Schmooblydong Wheel on reels 1 and 3 will trigger a re-spin, whereas landing these on reels 1, 3 and 5 will activate free games. When the wheel lands, it will spin and determine certain aspects of your bonus game. The wheel on reel 1 will reveal a character; on Reels 3 and 5 the wheel will reveal a number. The number on reel 5 will always determine how many free games you will receive.

Playtech have done well to create American Dad slot in a way that appeals to fans of the show and everyone else. With an abundance of bonus features and humorous clips, it’d be difficult not to enjoy!