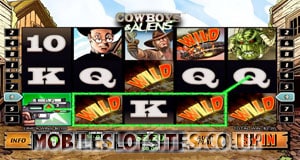 This nutty video slot is certainly out there like Pluto. The main premise of the game literally is Cowboys and Aliens, and it is hard to think of a nuttier, quirkier Playtech developed video slot out on the net at the moment. This game features a total of 5 reels and just 9 paylines. Naturally, you won’t be able to adjust any of the paylines which feature in this game, though you can adjust the line bets to anything from 5p up to £100.

Cowboys and Aliens is not exactly a cheap slot to play, with minimum bets costing you 45p a pop, and maximum stakes costing you up to £900 a spin. It is just as well that you can win as much as 10,000 coins on a single spin in this game.

The burning UFO comic strip icon is a wild symbol, and also the top paying symbol in the video slot. It can substitute itself for all other symbols in the game, with the exception of the bonus, scatter, and Alien Weapon feature icons.

That Alien Weapon feature icon takes the shape of a gun, and it can only appear on the first reel. In this feature, player will pocket a random number of wilds from 1-4.

A free spins bonus round is triggered by landing 3 or more Cowboys and Aliens logo scatters anywhere on the reels. You will start the bonus with 8 free games, with comic strip wild icons. These wilds can occupy multiple positions on the reels, as kind of colossal symbols. Scattered wins can also be bagged with these symbols.

If the player can locate the bonus icon on the first, and fifth reel simultaneously, they will trigger the Alien Attack Bonus. In this bonus game, players can choose either Verity, Zeke, or the Indian Warrior. The character chosen must use their weapon to destroy UFOs to win cash prizes and multipliers.

Cowboys and Aliens has a lot going on. Those extra special features are the least that a 45p per spin slot can offer you. As for originality, this slot is up there with the best of them.