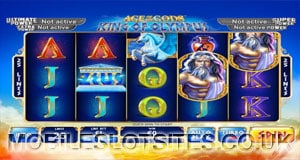 Age of the Gods: King of Olympus is a progressive jackpot online slot game powered by Playtech. Part of the popular Age of the Gods series, this 25 pay line slot game is based on the Greek God Zeus. Set within the clouds under the blazing sun, the game is graphically impressive with super sleek sound effects to match, plus a suitably powerful soundtrack. Furthermore, the slot game offers a captivating free spins bonus game and four tantalizing mystery progressive jackpots.

Play Age of the Gods: King of Olympus Slot At

The 5 navy reels featured within this Age of the Gods game present a variety of symbols in keeping with the Zeus theme. You’ll find Pegasus, followed by Aetos Dios (the eagle of Zeus), a ship, a harp and a vase make up the highest value symbols. The lower win symbols are standard playing card icons Ace through to Jack. Zeus also features as a symbol; the highest paying in fact (landing 5 on an active pay line will award you a staggering 3000x your bet) and he also acts as the game’s wild. In addition, Zeus will substitute all other symbols apart from the scatter symbol.

The scatter symbol is identifiable as the Temple of Zeus. 10 free games with additional treats will be awarded if you land 3, 4 or 5 scatter symbols. The free spins will begin with a x2 multiplier for any win; this multiplier will increase in value by +1 every 2 spins, resulting in your 9th and 10th spins being subjected to a x6 multiplier. There is also an additional wild during the free spins games, which appears on the third reel for every spin. The free games, unfortunately, cannot be re-triggered – but there is excitement and opportunity aplenty provided by the free games.

Now for the biggest attraction of the Age of the Gods series; they are linked to four mystery progressive prizes: Power jackpot, Extra Power jackpot, Super Power jackpot and Ultimate Power jackpot. The higher your bet, the better the chances of being entered into a Click and Reveal progressive jackpot game. However, any spin can be entered. Once entered, you are guaranteed to win a jackpot of the four available.

Age of the Gods King of Olympus is a thoroughly enjoyable online slot game. Pay with the added thrill of potentially being entered for the grand progressive jackpots at any moment. The free spins game is great fun too. This is a medium variance game and well worth checking out, in addition to the other slots in the impressive Age of the Gods series.