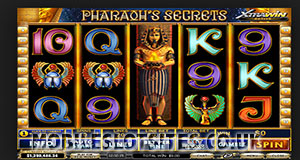 Pharaoh’s Secrets is certainly one of the older video slot games Playtech has developed, which can still be found at mobile casinos today. It hasn’t aged terribly well, but it can still offer you a non-progressive jackpot worth 50,000 coins.

The video slot features coin values of 1p up to £2, and as many as 10 coins can be staked per line. Minimum and maximum wagers are going to vary from 1p per line, per spin, up to £400 per spin, on this 5-reel, 20-payline non-progressive video slot.

Pharaoh’s Gold contains an XtraWin feature, and players need to be playing with all of the paylines active to trigger this feature. When this feature is active, an extra 50% of your wager is staked, and wilds in the base game will become expanding wilds. Pay-outs are slightly increased, too.

The wild symbol in Pharoah’s Secrets is the Pharoah’s mask, and when this icon appears it can replace all others in the game, save for the scatter. Wilds can only appear on the second, third and fourth reels, but can double all wins in which they appear.

A free spins bonus round is present in Pharaoh’s Secrets, and it is triggered by land 3 or more of the scatter icons in any positions on the reels.

In the free spins bonus, wilds will automatically become expanding symbols, whether the XtraWin feature has been activated or not. Before the round begins, though, players will be asked to choose from several symbols, in order to determine just how many free spins they will get to start the bonus round with. Between 5 and 100 free spins will be offered.

To be perfectly honest, Pharaoh’s Secrets has not been well-received of late. It used to be quite a popular slot, but understandably, modern players aren’t going to want to wager an extra 50% stake for expanding wilds, especially when so many other top mobile slots carry expanding wilds as part and parcel of their gaming structure. It is still a classic, though, so could be worth a pop, if you like legendary slots.