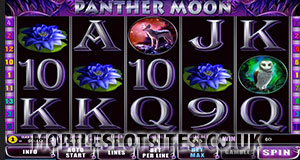 Panther Moon is one of Playtech’s older slots, having been launched in 2011. The slot game’s graphics are still commendable, even if some elements of the slot are now dated. Naturally, there is an air of the mystical about the Panther Moon slot, which is played over 5 reels and just 15 paylines.

Players can choose coin denominations which range from 1p up to £5, and they can stake up to 10 of these coins per line. Players will ultimately be wagering anything from 1p per line, per spin, up to £750 per spin, which is hefty maximum wager to say the least.

Panther Moon features the titular Panther as its wild symbol. When this icon appears, it can substitute itself for all other symbols in the slot, with the exception of the scatter icon. Players will also be delighted to learn that wilds double wins. The panther icon can also offer you a non-progressive jackpot of 10,000 coins, if 5 are struck on any active payline.

The moon acts as the scatter – but of course, right? When this icon appears two, three, four or five times in any positions on the reels, it will offer scattered wins of two x, five x, twenty x or five hundred x the total bet.

When players land 3 or more scatters in any positions on the reels, they will trigger a free spins bonus game. The bonus round in Panther Moon is pretty basic, offering players 15 free games, with all wins multiplied by 3x their normal rate of pay.

Panther Moon has aged moderately well, but this slot is a lot more difficult to find in online casinos today, than it was a couple of years ago. It is not Playtech’s most popular slot by any means, and that could be in part down its rather primitive gameplay. That being said, wagers can be cheap and prizes can be vast, so Panther Moon still has a lot to offer, almost five years after it first launched.