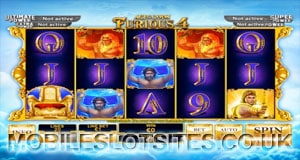 Age of the Gods: Furious 4 is an online slot game by Playtech, and features within their popular Age of the Gods slot game series. Each game within the series has a powerful Greek mythology theme. Furious 4 slot game centres around four of the Greek Gods: Apollo, Pandora, Haphaestus and Atlas. This intense, exciting game consists of five reels and 20 pay lines. It’s appeal lies mostly within the selection of free spins and progressive jackpots available. Read on discover more.

Play Age of the Gods: Furious 4 Slot At

The symbols within Furious 4 consist of the four aforementioned Greek Gods. These are higher value whereas the lower win symbols are made up of playing card icons from Ace to 9. There is also a gold coin featuring the number 4; this is the wild within the game and will substitute everything but the scatter (throne symbol).

Consequently, landing 3 or more of the throne scatter symbols will award you 12 free spins and an opportunity to activate a furious feature. There are 4 available, and these are triggered by the corresponding God covering the entire middle reel.

Age of Light: activated by Apollo landing on and covering reel 3. You will receive 4 free spins where Apollo will substitute all other symbols except for the scatter and the wild.

Age of Curiosity: triggered by Pandora covering reel 3. One cash prize and 4 free spins are awarded; these begin with a 1x multiplier which increases by 1x each time a Pandora symbol appears.

Age of Endurance: Atlas covering reel 3 will trigger this. Atlas symbol substitutes all but the scatter and wild, and freezes until the Age of Endurance spins are over.

In addition to the exciting free spins and furious features, the game has gained popularity due to the 4 mystery jackpots that the Age of the Gods series are linked to. Also, the jackpots can be won completely randomly when the jackpot game is activated. The symbol match jackpot game can be triggered any time and after any spin, but the greater your bet, the better your chances. Once the game begins, you are guaranteed to win one of the 4 jackpots! It’s clear why the game is so loved.

A powerful and exciting game that has it all really. Furious 4 offers a great theme and impressive graphics, a variety of bonus games and mouth-watering progressive jackpots, therefore we’d categorize this as a must-play!