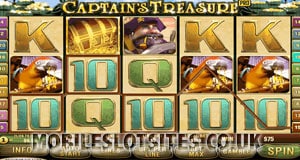 Captain’s Treasure is one of the least complex Playtech slots to be released over the years. The slot is most certainly pirate themed in nature, although there isn’t too much in the way of graphical superiority to speak of. Captain’s Treasure is a standard 5-reel, 9-payline mobile slot game, and it is one which contains coin values which stem from a low of 1p, up to a high of £2.

Players will be able to bet up to 9 coins per spin, which equates to one for every payline present in the slot. You are looking at wagering anything from a low of 1p per line, per spin, up to £18 a spin on this video slot, which actually features Playtech’s age old progressive jackpot format, the Dollar Ball.

In all honesty, special features are rather few and far between in this slot machine game. You can see that the pirate icon is a wild symbol in this game, and when it appears, it can replace all other symbols in the game, without exception.

The scatter icon happens to be the treasure chest, and this symbol is capable of offering you scattered wins of 1x, 5x, 10x, or 100x your total bet, when it appears 2, 3, 4, or 5 times in any position on the reels.

This slot’s progressive jackpot is known as the Dollar Ball. It is certainly not the most enjoyable progressive, but it can be worth big money. To win it, players need to activate a side-bet. From there, they will have to match 5 numbers with those appearing on the scroll bar, just like you would in a lottery game. If you match all 5, you’ll win the top prize.