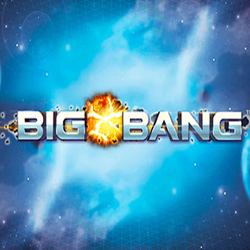 Space-themed games are plentiful within the online slots business, however a new one from gaming leaders NetEnt is still going to get us excited. Based on the cosmological theory of how the universe was created, the game is of course set within outer space and brimming with neon stars, planets and all kinds of mesmerising imagery.

There’s a soothing, 80’s style soundtrack making this a pretty relaxing game, and there’s not a great deal of player interaction so we’d definitely class this a ‘chill out’ game. There are 5 reels, 3 rows, 25 fixed pay lines and the focus is on the multiplier meter – read further to find out more.

The intriguing reels of Big Bang display a beautiful collection of out-of-this-world visuals. There’s a selection of fascinating moons and planets amongst really well-designed playing card symbols. There is also a fabulous, powerful burning sun symbol; this is your Wild and acts as a wild for all symbols within the game. 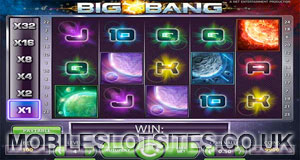 The primary focus of Big Bang is the Multiplier Meter. You can’t miss it; it’s to the left of the reels displaying a ladder of multiplier values. The meter is active throughout the main game (there is no separate bonus game) and you’ll have loads of fun watching as you climb up the multiplier values.

The way it works is this: the bottom “rung” of the Multiplie Meter (x1) is selected, meaning that any wins will be subject to a x1 multiplier. However, following a win, the multiplier will double, and you’ll see the selection move from x1 to x2 in the meter. For every sequential win, the multiplier will double, until it hits a maximum of x32 – the top of the meter. Of course, should you spin and not win, the meter will return to the bottom and the process will start all over again.

The Multiplier Meter is great because it allows players to hit a whopping x32 multiplier and result in some significant wins. This isn’t too difficult to achieve, either (in our playing experience). Furthermore, it’s pretty exciting to watch as you keep winning and your multiplier values climb, therefore despite not having much player interaction, it’s a really engaging game that you’ll just want to keep playing. The graphics are great too. Once again NetEnt have succeeded in creating a great game where an additional bonus game isn’t missed in the slightest.