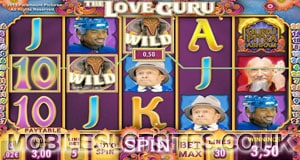 The Love Guru is an iSoftBet video slot based on the 2008 rom-com movie of the same name. The Love Guru slot is every bit as psychedelic and jazzy as the movie, set on a purple background complete with funky flowers and Indian elephants. It has 5 reels, 3 rows and up to 30 paylines which can be reduced to as little as 1 line if you wish.

Play The Love Guru Slot At

The reels consist of a variety of symbols in which you must land 3 or more to create a winning combination. There are the traditional playing card icons from Ace to 9 which make up the lower values, in addition to some characters from the film whom you’ll recognise if you’re a fan! The top value symbol is represented by the name of the Love Guru himself, Guru Pitka Ashram, followed by images of the charcters Guru Tugginmypudha, Darren Roanoke, Coach Punch Cherkov and lastly Dick Pants.

There is also a symbol containing the film logo: ‘The Love Guru’ and should you land three of these anywhere on the reels, an instant cash prize will be revealed.

The bonus symbol is a colourful, flowery image and easy to spot, and three or more of these will begin the second (and more exciting) bonus round on offer by The Love Guru. You will be asked to choose from a selection of boxes on the screen and this will reveal free spins (up to a total of 20) or a prize.

The Indian elephant makes up the very useful Wild, and this will replace any symbol except for The Love Guru symbol and the Bonus.

The Love Guru video slot is sure to be a big hit with fans of the movie. For everyone else who may not recognise the characters, this is still a cheerful game to play with a couple of good features, particularly the interactive bonus round. The bonuses don’t seem to crop up quite as often as they do on many other slot games but when this one does, it’s worth the wait.