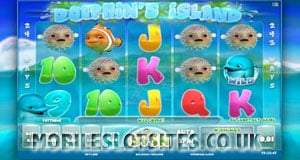 Dolphin’s Island is a 3D mobile slot, which has been released by iSoftBet. The game features some of your favourite underwater animals as icons on the reels, all wrapped up in a bubbly, child-like, sky blue theme. Dolphin’s Island features your usual 5-reel setup, but players can win over 243 paylines. Wagers are also cheap in this game.

After choosing coin values which range from 1p up to 10p, players can stake anything from 25p per spin, up to £12.50 per spin. You’re going to want a good return for your bets, and Dolphin’s Island can offer you that, with a non-progressive jackpot worth 250x your total bet.

The Dolphin symbol is a wild, and it is capable of appearing on all of the reels in the game. It doesn’t offer any cash prizes on its own, but it can substitute itself for all icons barring bonus and scatter symbols.

The Dolphin symbol is a free spins bonus symbol. It is useful, since it can be used to trigger free spins. All you have to do to trigger that bonus is get it to appear on the third reel. That shouldn’t be too hard. During the free spins bonus game, random wilds, wild reels or blocks of wilds (stacked wilds) can make the difference to your game.

3 or more of the wheel bonus icons will trigger another bonus game in Dolphin’s Island. The amount of bonus icons you get on those reels will determine how many spins of the wheel you get. On the bonus wheel are multipliers, which can offer you up to 100x your total bet.

Dolphin’s Island has the kind of feeling to it that it should be played by children. Of course, that is not possible. Instead, perhaps the biggest core audience for this slot should be adults who retain their youth. It really is that kind of game. Aside from that select group of players, anybody who loves a mass of multiplier prizes may also find Dolphin’s Island appealing.