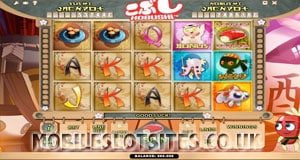 Kobushi is a cartoon sushi themed video slot, and one which takes in the best of the Japanese animation world as its theme. Kobushi actually features pieces of sushi as characters on its reels, and is played over a total of 5 reels and 30 paylines.

iSoftBet have chosen to make this game a progressive jackpot slot, with players able to win a Sushi Jackpot, or a Kobushi Jackpot in this game, with the latter being worth more. Players will also be able to choose minimum and maximum wagers which vary from 1p per line, per spin, up to £3 per spin. It is hardly bank busting stuff, and that’s great.

The green sushi icon acts as a wild symbol in Kobushi. This symbol can offer you 1,000 coins if 5 are lined up on any active payline, as well as replacing itself for all other icons in the game, save for the scatter and bonus icons.

Meanwhile, the scatter icon is represented by the rice and salmon sushi piece. This can offer you scattered wins worth 5x, 10x, or 25x your total bet, when 3, 4, or 5 such symbols appear anywhere on the screen.

In the Kobushi bonus round, players could end up with extra wilds, a free spins bonus round, a BIg Cat Bonus pick and win game, or extending wild symbols. Three or more Kobushi icons will trigger this bonus round, and some of the other bonuses can be triggered from the Big Cat Bonus.

Kobushi has been expertly designed, with a very authentic Japanese anime look to it. Moreover, the bonus rounds are creative and original, too. There is a lot to win in Kobushi, and it has one of the lowest wagering ranges of any progressive jackpot slot.