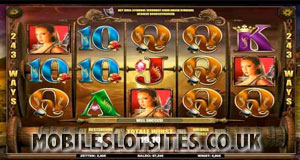 If you’re expecting a host of rock stars to appear in this slot, you’re set for a shock. Heavy Metal Warriors is actually based on sword, and weapon carrying, armour clad female warriors.

Heavy Metal Warriors is one of iSoftBet’s more fantastical slots, and features a total of 243 paylines spread over 5 standardised reels.

Heavy Metal Warriors can be reasonably cheap to get to grips with, with minimum and maximum wagers ranging from 40p a spin, up to £100 a spin. It’s hardly going to put you out of pocket, is it? Players can expect to win as much as 500x their total bet in this iSoftBet slot.

The purple shield acts as a wild in Heavy Metal Warriors, and it can replace all other symbols in the game, barring the bonus icon. Wilds cannot offer you any monetary wins, though.

A picture frame surrounding the words “Heavy Metal” is acts as a bonus icon. As a bonus, it can appear anywhere on the reels, and you’ll need 3 or more such symbols to trigger a Pick Me bonus game.

Players will start the bonus round by picking from symbols on the screen. They will also be offered scattered wins based on the number of scatters they located. Behind each pick will be a number of free spins. You’ll win between 10 and 30 in total. After that, a free spins game begins. In that free spins bonus, the wild symbol appearing anywhere on the last reel will jump to the third, and fourth reels, too.

Heavy Metal Warriors is not quite what you thought it was, then. Naturally, there are going to be players who aren’t interested in playing a female warrior, fantasy themed game. However, all of the elements are there to make Heavy Metal Warriors one of the better fantasy themed slots on the net. For starters, it is certainly not short of any special features. It is also cheap, and has pretty decent cash returns.