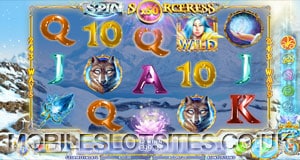 Spin Sorceress is one of NextGen Gaming’s more creative online video slots. It utilises some moderately decent graphics, and contains their Super Bet feature. With it, you can have your wins multiplied, at a small additional cost. Spin Sorceress certainly looks the part, but how does it play? The game contains 5 reels and 243 ways to win, so naturally you won’t be able to adjust any of the lines which feature in the game. Spin Sorceress slot will set you back anything from a low of 25p per spin, up to £50 a spin, which is peanuts for a 243 payline game. You can even win up to 500x your total bet in this slot, with its non-progressive jackpot.

The sorceress herself appears as a wild symbol in this game, but she can only turn up on the second, third, and fourth reels of the game. When she does, she can substitute herself for all other symbols in the slot barring scatters. She may also turn entire reels into wilds, and when that happens you are guaranteed to win.

Scatter icons appear as diamond encrusted spell books. These symbols can see you win 2x, 10x, or 50x your total bet for 3, 4, or 5 icons appearing anywhere on the reels. If you land 3 or more such symbols, you will pocket a total of 10 free games. During the free spins bonus round, 3 wild reels will appear on every single spin.

If you take your chances with the Super Bet feature, and pay that little bit extra, you can really enhance your wins. This feature will see players able to conjure up magic multipliers worth as much a 50x the normal rate of pay. The amount you can win depends on how much extra you wager.

Feel free to wager extra to bag multipliers if you want. Some slots have side bets which are a rip-off, but that isn’t the case with Spin Sorceress. This game’s side-bets come good more often than not.