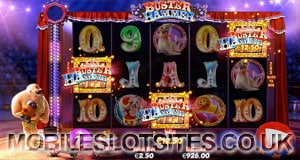 Buster Hammer is the title of a NextGen-powered online slots game. This particular game features an old-fashioned circus theme; think trained animals and performing humans with extraordinary talents. The 5 reels of this superior-quality slot game are presented by an open, red and gold-trimmed show curtain, featuring a cheering and gasping audience in the background. There are no standard pay lines, but 243 possible winning combinations. To the left of the reels is Buster, the strong circus performer whose role is to swing his hammer at the high striker – you’ll want this to happen as often as possible! Read on to find out why.

The reels of Buster Hammer display a variety of vibrant symbols including four theme-related icons. These are the higher value symbols: Buster, a seal, an elephant balancing on a ball and a lion jumping through a hoop. The remaining symbols are standard playing card icons from Ace to 9.

In addition to the standard reel symbols, there is a hammer which functions as the wild. This substitutes every other symbol apart from the scatter, which is a circus tent.

Wild Multiplier Feature – when a wild hammer symbol appears and creates a winning combination, Buster will swing his hammer at the high striker. A multiplier is revealed and subsequently applied to the winning combination. If you land several hammers that form a win, this will occur once for each and can ultimately result in a pretty lucrative win.

Free Spins – the circus tent scatter will trigger free games is 3 land in view. Players have the choice of:

Super Seal Feature – this can be triggered completely randomly. Initally, there is a payout of 5x the total bet, but Buster will swing his hammer (possibly more than once) and all multipliers are added. There is the potential to win up to 75x your total bet here!

The presentation, graphics and sound effects are sharp and spot on in Buster Hammer. The bonus features are plentiful too. This is undoubtedly one of the higher end slots games and is certainly worth checking out.