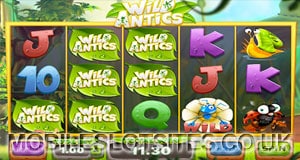 If you get ants in your pants when there’s a new online slot game to try out, you’re in for a real treat with this NYX Gaming slot game called Wild Antics. It’s exciting, it’s full of energy and it’s all about our busy little insect friend – the ant. Wild Antics is a 5 reel, 3 rows slots game with 20 fixed pay lines. Set in a leafy environment, enhanced by superbly impressive graphics, our productive pals feature on the reels and within the backdrop amongst a few other friendly bugs and beetles. This colourful game offers an abundance of bonus features that will prevent the boredom setting in and keep you entertained for hours. Read ahead to discover more.


The Wild Antics reels present a variety of beautiful bugs. There’s the wild ant; this will substitute all symbols within the game except for the collection of bonus symbols. There’s a plump blue grub, the game logo (this appears as super stacked), a dainty ladybird, a slimy snail, and finally, a collection of traditional playing card symbols from 10 to Ace.

In addition to this impressive variety of bonus features, Jetpack Ants can appear at any time and re-trigger your bonus feature!

During the main game, Adam the Ant can appear randomly and trigger crazy antic bonus features:

Wild, fun, exciting and incredibly watchable – Wild Antics is an exceptional game that NYX can proudly add to their increasingly impressive collection.