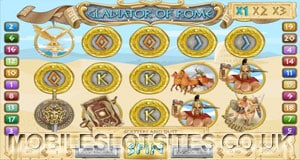 Look no further than Gladiator of Rome if you’re on the hunt for a feisty, intense, battle-filled online slots game. It’s new, it’s atmospheric, it’s loud and it’s fast-paced. It joins a multitude of Roman Gladiator-themed slots games so does it have what it takes to stand out? Gladiator of Rome is by NYX Gaming and boasts some pretty great graphics and features. There’s a free spins bonus game (which is very generous, may we add) and the whole thing is set within a sandy desert battle scene; in the distance you can make out the old ruins of a Greek temple. There are 5 reels, 3 rows and 20 pay lines to play in this thrilling new slot game.

In addition to the standard reel symbols, there’s bonus icon which is your key to the only bonus round featured within Gladiator of Rome. Also, there’s a wild; this substitutes all other symbols but the bonus.

Gladiator of Rome only has one bonus feature on offer but it’s a good one. Landing 3 bonus symbols on reels 2 – 4 will award you a whopping 30 free spins! Furthermore, there are no Queen or King symbols featured within free spins, meaning higher wins are likelier. If that’s not quite enough, the multipliers get larger as the game progresses! Your winnings are subject to a x1 multiplier during the first 10 free spins, then a x2 multiplier during the second 10…while the final 10 free spins wins are all tripled. Watch the multiplier progress in the table in the top right corner of the game. The only downside is that free spins can’t be retriggered, but who cares when the original bonus game is so generous?

With such a bold theme, intense music and striking graphics, we could tell this was going to be a winner the moment the game loaded onto our screens. There might only be one, non-retriggerable bonus game on offer here but it’s a strong bonus game and a reason to keep playing Gladiator of Rome. Highly recommended – don’t miss out on this one.